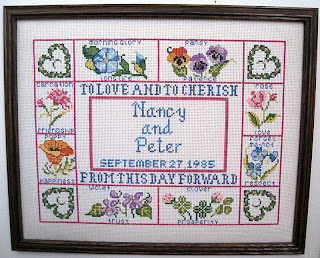 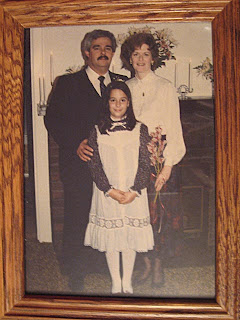 On Friday, September 27, Peter went to work as usual. I took the day off to arrange a few flowers and try to steady my nerves. A little after 6:30 p.m. Peter, Abby, and I arrived at the home of my friends Carol and Michael and their children, Dan and Maia. The minister arrived a few minutes later, as did Peter’s friends Jim and Sharon. Exactly at 7 the sun came out from behind a cloud and angled its way through the living room window, landing just in front of the fireplace. We emerged from the kitchen, took our places in the sunlight, and pledged to love one another to the best of our abilities.
Posted by Nancy/BLissed-Out Grandma at 8:22 PM

What a lovely way you have captured the way two lives blend to make one.

I think when you are 42, you just know what works and what doesn't, and moving fast was what was just right for you.

Look at how right you were!

Happy 25th! What a beautiful post to celebrate this event with us. Hope you've got fabulous plans of your own out in the world.

I just love your stories!

It sounds like however you did it, you did it right. I know the pangs of moving two independent households into one.
Happy anniversary! 25 is quite a milestone.

Well, it looks like it was meant to be, after twenty-five years I think maybe it will last. :-) Congratulations and happy anniversary. Isn't it the Silver Wedding Anniversary? That's such a good story, too.

lovely story ... happy couple
My daughter got married last Xmas. She was 34 and had traveled the world. Now she has 2 kids, 9 and 11, and all the troubles that go with dealing with the kids mother. Since he had already taken care of the baby making...(o: we don't know if they will ever be able to have their own. Their family picture is up on my blog right now.
Any way, I am happy for you and the years you guys have had together (o:

It's a beautiful story, and well-told! You two deserve another 25 years of happiness together-- or MORE! May all your celebrations be grand!

Great story, well-told. May you enjoy many more years together.

And, I'd like to add, the crewel work(?) includes the most important phrase in the traditional marriage vows, "To love and to cherish." That pretty much covers all the rest. Nice photo of the big day, too.

Happy 25th!! What a great story..it is a good thing for you that Peter was looking! :)

This is simply beautiful. What joy -- and so many years of it! I love how you have been able to combine your lives, your interests, your things. I always say despite our 14 years together, I don't know Rick and I can ever live in the same house! They are so different, as are our styles, and while we are at one on values and wildly compatible, we both need our own spots! Reading this gives me the thought that maybe one day we'll decide we actually can combine so successfully as you!

that was a lovely story nancy. to wake up, 25 years later and recognize the joy, the laughter and the beauty of living in love. you are deserving of your happiness. CONGRATULATION!

Happy Anniversary!! That was a great story!!

I simply cannot agree more with you about the "stuff." Neal was so proud of his decor when we married and I moved in. Lots of HUGE gold leaf frames and such. I'm more of a silver and glass kind of girl. But we've made a compromise. We decorate our base housing with his stuff (which is a little more painful for me because that's where we are most of the time) and our new townhouse with my stuff (nice for me when he deploys and I come home for long stretches of time). They are incredibly sensitive about their stuff, though, yes?

Happy Anniversary! And September anniversaries are THE BEST! We celebrated ours on the 22nd. And we are still loving each other to the best of our ability. I know you are, too!

What a lovely story. I love how you "did" your wedding.