The myth of the 'little project'

When I worked as a publications director, people sometimes came to our office requesting "just a quick little project." We always winced. "Little projects" are the worst. Everything that can go wrong, does.

I should have remembered that three weeks ago when I began a quick little home improvement project. I thought it would take a couple of days. I'm still not done. Like those pesky small projects at work, this one has gone wrong at several points, sometimes because of my choices and sometimes not.

It all started when we hired someone to repair the ceiling in my office, which had sustained water damage last winter. All I had to do was pack up my computer plus the papers and projects and clutter and bric-a-brac in my office, move the boxes out, and help Peter move the furniture into the dining room (having first moved the dining room furniture into the living room). When the ceiling guy was finished about four days later, we'd moving everything back in. 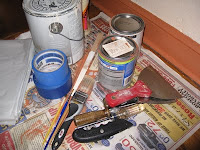 It was a tough four days without my computer, but I made do using Peter's laptop in the next room, plus my iPad. (Yes, I'm aware how spoiled that sounds.) Then we moved the desk, file cabinet, and sewing machine back in.

That's when I noticed that the paint on the window next to my desk was cracked and peeling. It could use a touch-up. Peter said he had the paint I'd used before, and of course it would be easy to do with much of my stuff still out of the room.

Well. Apparently I had taken the leftover paint and tried to mix a new color. It was hideous. But it reminded me that I had wanted to make the woodwork darker. Since we didn't have the matching paint, I might as well choose a new color and do all the trim: a double window frame, two doors and their frames, and the baseboards. Easy-peasy. A couple of days, max.

I got distracted choosing colors using a "paint your room" online feature. Eventually, I chose "persimmon," which looked like a nice terra cotta tone to accent the pale apricot-to-peach color of my walls. I checked the color chip at the store, bought some, and began to paint. Alas, persimmon turned out to be too bright and too pink. It should have been called geranium.

I went back to the color samples, seeking something deeper, more subtle, perfectly balanced between orange and pink. I was debating between "baked clay" and "cavern clay" when I noticed something: both were very close to the trim in our kitchen. We had most of a quart of that - Glidden's "amber coast" - in the basement. Peter had suggested it to me two days earlier. Now I decided it was perfect. This turned out to be a good decision.

Over the next three days I painted two coats over all the trim. (I could have done it faster, but I had gardening to do, blogs to read, baseball games to attend, sore muscles to rest.)

Then I pulled off the blue masking tape that I had so carefully applied everywhere. Ouch! I discovered not one problem but two.

First, some of my lovely "amber coast" had leaked behind the masking tape, filling little depressions in the plaster wall. It looked like a frilly fringe along the baseboards and door frames. I tried scraping, but it wouldn't budge. Instead, Peter found some leftover paint that matched my walls, and with a tiny paint brush I went around all the edges, painting out the "fringe."

Second, and even more annoying, the special-blue-masking-tape-for-paint pulled off some of the underlying paint it was meant to protect. Paint from the center panel of each door, a light color that I wasn't planning to change, peeled off in strips with the masking tape, and so did some bits from the surrounding woodwork. That is not supposed to happen; this is precisely why we use the blue tape instead of the old beige stuff!

Meanwhile we needed our dining room back, so I've moved my boxes back into the office. And I needed some of what was in them, so they are partially unpacked. I'm trying to sort out and get rid of stuff as I do this, so at any given moment I have one garbage bag and one growing pile of figure-out-what-to-do-with-this-later.

I still have to finish the doors. But I'm nearly out of paint, so I have to go out and have another can mixed. The way things have gone, I am almost certain the new paint won't quite match. I'm stuck, or as I like to think of it, taking a little break. It's been more than a week now.

The good news is I'm happy with the new color and with how everything looks, or will when the doors are done. What began as a simple functional task - providing some protection for the wood of the window frames - became a small exercise in self-expression. That, of course, is how our clients felt about even the simplest poster or invitation, and it's part of the reason so many projects grew beyond their functional importance.

I'm happy not to be doing publications work any longer. I'm happy to make my own decisions on my own projects. And set my own deadlines. And meet them, or not.