Peter was insistent: we were going to Once Upon a Child, our nearby used clothing store, to find "ruby slippers" and a blue-and-white-checked pinafore so Vi could dress up as Dorothy Gale of Kansas. I admit it: I rolled my eyes. Yet another of my husband's crazy ideas.. 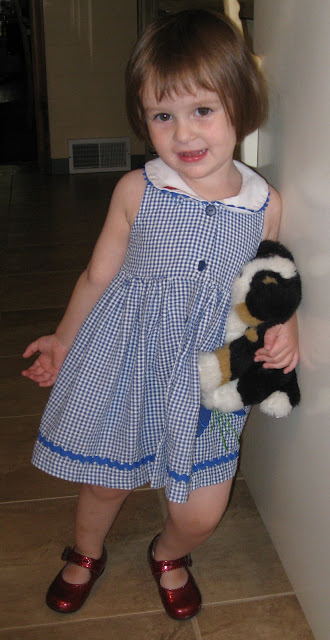 Except it was a great idea. ViMae loves her ruby slippers and wears them constantly. She loves the dress we found and wears that nearly every day, too. She renamed her little dog and now totes Toto everywhere she goes--sometimes in a basket.

The kids love the excellent Wizard of Oz exhibit at the Children's Museum (the exhibit closes Sept. 12). We showed them the opening scenes of the movie in which Dorothy gets transported to Oz and meets her traveling companions. Mom and Dad showed them the rest, carefully talking through the scary parts. Like Dorothy's heels, something clicked. ViMae decided she was Dorothy and she assigns supporting roles to those around her. Sometimes I get to be Glinda the Good Witch. Pa has been the Wizard... totally appropriate, given his role in encouraging this little scenario. He regularly tells her to "Pay no attention to the man behind..." whatever he's hiding behind at the moment.

She sometimes responds only to her pseudonym and occasionally blames Dorothy for bad behavior ("Vi doesn't have the crayon in her mouth; Dorothy has the crayon"). Mostly she just has fun with it. And what better role model? Dorothy is brave, and she helps her friends.

The other day, Abby mentioned that Vi's feet are growing again. We've already gone back to buy red shoes--er, ruby slippers--in a larger size.
Posted by Nancy/BLissed-Out Grandma at 12:01 AM 19 comments: