I thought this wouldn't happen for another 10 years

At breakfast the other day, Peter was recapping a conversation he'd just had with Augie. They'd been talking about Augie's favorite things to do.

These included a list of favorite activities with his mom, dad, and sister (zoo, museums, baseball games, other outings); preschool; and coming to Pa and Grandma's house. We all agreed he and ViMae had a very nice life.

I said I was glad they liked coming to our house. Peter and I told both children, again, how much we loving having them spend time with us. We said we loved sharing things with them, like music and bird-watching and stories. Then we took it a step too far.

Peter said something like, "We hope we can do this for a long time; we have lots more things we want to share with you."

Augie replied, "But Pa, I already know about everything."
Posted by Nancy/BLissed-Out Grandma at 1:59 PM 20 comments:

Yesterday I hung a nyjer seed sock just outside the kitchen window, hoping to attract goldfinches. Within an hour, I spotted one on the sock. It flew off to a neighbor's yard, and five minutes later, a half-dozen winter-hued goldfinches showed up. This morning they were back in force, and they timed their visits so we could watch them during breakfast and lunch. 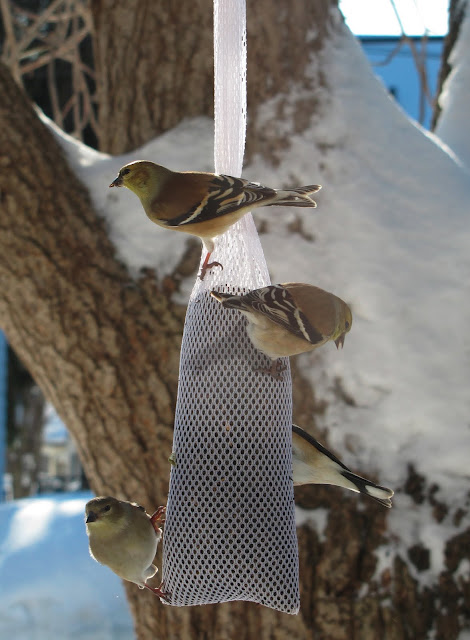 While I was hanging the sock, I heard what seemed to be some calls of alarm from birds around the neighborhood. I looked up and saw a red-tailed hawk flying very high, directly above our house. It was a dramatic reminder of the wide variety of birds in our urban forest.

Meanwhile, Peter and I are wowed by the fact that these tiny birds found this little sock feeder so quickly. The kids are delighted to watch them, and we all look forward to seeing their summer colors... many months from now.
Posted by Nancy/BLissed-Out Grandma at 11:30 PM 23 comments:

We were driving to preschool on Thursday.

Me: "What is it that you don't understand?"

I took off my earmuffs to hear better, but his little voice couldn't entirely pierce the noise of the engine, the fan valiantly trying to warm the car, and the square tires galumphing over ice ruts and potholes. So what I heard sounded like, "Mfff nuddle shpin Pa said norple glang beezer." He continued for a while, and he seemed to be working through a confusing situation. Then, clarity.

Me: "Are you saying you're still hungry?"

Augie: "No, I'm not hungry. I'm talking about my butt. I didn't eat enough pressure."

Later, Pa helped me figure it out. Augie is a prodigious eater of fruits and vegetables, oat cereals, and other foods that make him a champion pooper. Everyone celebrates this.

But his first attempt that morning was a rare occurrence for him, involving an enormous struggle, a bit of pain, and a clot of nasty little marbles. Soon after, he was back to form, producing two excellent specimens. Pa explained once again about how the right foods produce easy, healthy poop. But during our drive, Augie was still puzzling over what had gone wrong.

In his experience, when you want to move something through a tube, you apply pressure. Hence his conclusion: "I didn't eat enough pressure."

As long as we can equate "pressure" with fiber, this kid's going to be a champion.
Posted by Nancy/BLissed-Out Grandma at 3:11 PM 26 comments: