Two months ago I started making a princess dress for ViMae. She wanted to wear it to the Renaissance Festival first, which gave me about three weeks, and then for Halloween. No problem, I thought. 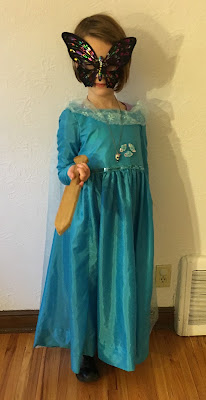 She chose a pattern and then picked out fabric and trims for the dress and its lacy cape. The girl has a wonderful sense of color, and while she might mix jarring tones in an art project, everything about the dress had to harmonize. The big surprise: instead of pink, she wanted blue. It occurred to her that people would think she was dressing as Elsa, from Disney's magahit Frozen, and she didn't want to be just one of many. So she decided to be Assassin Elsa, stashing a dagger in her boot and threatening to stab anyone who doubted her evil intentions. (You may recall that last year she was Bellatrix Lestrange, the most evil female villain in the Harry Potter series.)

Everything was coming along fine until my sewing machine acted up. It was skipping stitches and breaking needles, and eventually I learned it couldn't be repaired. So work came to a halt while I did some research and bought a new machine. (I switched brands in the process--the trauma was roughly equivalent to renouncing my birth family and going over to the Dark Side.) Anyway, I finished the dress one day before Halloween, and ViMae loves it. Now she is excited that the waiting is over; she can wear it any time, for any occasion. 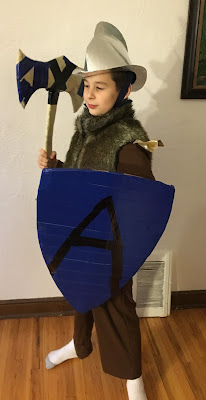 Augie dressed as a Berserker, a medieval Viking warrior named for the bear pelts they often wore. Now celebrated in video games and comic book art, the Berserkers worked themselves into trancelike states in which they felt no pain until the battle was over. Berserkers were undisciplined enough that Augie's collection of warrior gear--none made specifically for that period--made up a great costume.

Augie's outfit involved lots of teamwork. He made his shield and axe at Cardboard Camp some weeks ago. Grandma Anita had made him a warrior jumpsuit with flying gold epaulets, designed to his specifications. And Peter had just recently made a helmet called a morion, which in fact is Spanish in origin. We found a fur vest at Once Upon a Child, which suggested the bear pelt, and boots completed the look. Voila--a Berserker.
Posted by Nancy/BLissed-Out Grandma at 6:55 PM 13 comments: