You can't always get what you want...

Four is a great age, at least if you're a parent or caregiver. Kids are developing their personalities and their passions, they still have most of their innocence, and they are (mostly) getting past the tantrum stage so they can be reasoned with.

Augie had once told me, "Grandma, it's hard to be three." And it was. Suddenly he had to be thinking constantly about getting to the potty on time, no matter where he was or how much fun he was having. Also, his little sister, just 15 months younger, was graduating from baby toys to whatever he had at the moment. He had to learn to share, and to "Be nice to your sister."

This week, just after his birthday, I asked whether it was better being four, and he said, "Sure," which sometimes means, "I'm not wasting time thinking about that."

I'm no expert in psychology, but I know that at some point - and for me it was as a four-year-old - we realize that our parents cannot meet all our needs and wants, that the world is not perfect, that we are not guaranteed perfect love and success. How and when this hits us determines what our issues will be in later life. For example, some of us will crave unconditional love (love me for being who I am) while others will crave approval (love me for doing what I do). I don't know all the theory behind this, but I believe it. Peter says the trick is to help children come to grips with these realities without totally crushing their spirits.

Yesterday we were watching a few short videos on YouTube with Augie and Vi. As usual, Augie wanted more. We said no, it was time to go and play, and we started naming possibilities - play the drums, do some tap dancing, play with Legos, color, make sticker pictures, pound some nails, and on and on. He wasn't having any of it. He cried and carried on and buried his head in his hands. Then he looked up.

There it was. The Question. Not just, "Why can't I do what I want to"? but "Why can't I have whatever I want in life?"

But I stopped talking, and for the next half-hour we just sat and cuddled. Eventually he got interested in something his sister was doing and went off to play.

Later, during quiet time, I heard him singing softly to himself. "It's hard to be three. It's hard to be four...five, six, seven...." He counted up to twenty-something before he trailed off. He didn't sound especially upset, just interested and processing a new idea.

I don't want it to be hard to be four. But we can't always get everything we want.

So we'll have to set about being happy with what we have. And that's a lot.
Posted by Nancy/BLissed-Out Grandma at 4:24 PM 22 comments: 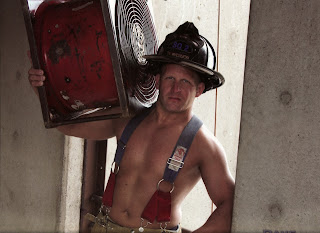 Meet Dave, who represents St. Paul firefighters for the month of March. The calendar benefits the Cystic Fibrosis Foundation and the Autism Society of Minnesota.

I'm always pleased to turn the page to March. It's still winter in these parts, but new snow usually melts fairly quickly in March, the sun is noticeably warmer, and days are growing longer. It's also my birthday month, and spring training is underway in major league baseball. Life is good.
Posted by Nancy/BLissed-Out Grandma at 10:45 PM 16 comments: