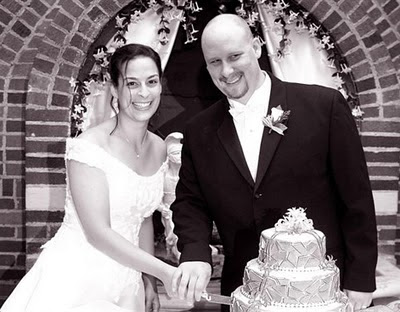 ...Abby and Eric were married in a heartfelt ceremony followed by a truly great party. Unlike her father and I, whose rapid courtship I have been chronicling, Abby and Eric had known each other for 10 years, having become friends as college freshmen. A few years after graduation, they risked their friendship to give romance a try--and to nobody's surprise, they turned out to be a great couple. They are smart, hard-working, loving, supportive of one another, loyal to friends and family, and fabulous parents. Their wedding was by far the best I've ever experienced...an especially warm and genuine celebration enjoyed by folks of all ages. Happy Anniversary, Abby and Eric!    (Photo by Dave Scheele)
Posted by Nancy/BLissed-Out Grandma at 7:00 AM 6 comments:

Posted by Nancy/BLissed-Out Grandma at 5:00 AM 13 comments:

Having proposed June 14, Peter’s idea was that we marry in the fall. I wasn’t ready to commit so quickly (we’d only met in April). Besides, I was going to be much too busy to plan a wedding. I was chairing the YWCA women of the year selection process and would emcee a December award luncheon for 600 people. A few days later, I would head to Chicago, chairing three days of conference programming for college and university publications people. Both of these would require time and attention for months, on top of my busy job.

Peter pointed out that when Abby returned from her Mom's for the start of school we would have much less opportunity to see one another. With both of us so busy, our relationship might indeed fail. On the other hand, if we were together he could cook for me and give me foot-rubs while I worked on my projects. I had to admit that sounded nice.

"Why don’t I just move in?" I asked. “No,” he said. “I want my daughter to know you are special, that I respect you. You’re not moving in until we’re married.”

One night we were sitting in the living room at my house, the house I had just furnished. It had character and beauty, and it was perfect for me. It would even work for two. The living room and master bedroom were huge, and the bathroom had a long counter with two sinks, two mirrors, two sets of cabinets. But the second bedroom was tiny, and we couldn’t quite make the place work for three. Plus, it was in the wrong school district; we wanted Abby to stay in her grade school. I began to cry at the thought of leaving my house. “You know what that means, don’t you?” he said. “You’ve decided to move and you’re beginning to grieve.” I couldn’t argue with that. I let myself cry a while longer.

They lived in a townhouse in a first-ring suburb. While I hated the whole idea of townhouses and suburbs, I hadn’t yet been there! He invited me to come over on Sunday afternoon, June 23. He and Abby spent the morning cleaning and they showed me around; then he made dinner for the three of us. After she went to bed, he put on a mix tape he had just made. It started with a song about flirtation and worked its way through romance to something along the lines of let’s spend our life together.

The day was drawing to a close. “What do you think,” he asked. “Could you live here?”

The townhouse was plain; I didn’t love it. But we didn’t have to live there forever, and the question wasn’t really about the townhouse.

The next morning at work I received orchids. I called to thank him. “Well,” he said, “It’s not every day that someone accepts my proposal of marriage.”

Omigod, I thought. What have I done?
Posted by Nancy/BLissed-Out Grandma at 12:53 AM 18 comments: