Sheep poop boots. When the kids were in Montana, they visited a ranch that had hundreds of new lambs. Augie reported that they'd had to wear boots, which Pa promptly dubbed "sheep poop boots." Both kids laughed, and they immediately began practicing that tongue-twister.

Pumpernickel pantyhose. Mommy made a wonderful batch of pumpernickel rye, which Augie called "Mom's brown bread." We'd already had hilarity over Grandma's pantyhose, so Pa, noting that said pantyhose were also brown, dubbed them "pumpernickel pantyhose." Again, much laughing and much repetition, working to get all the syllables just right. Augie loves wordplay, so even after he's mastered it he laughs and repeats, laughs and repeats. Vi loves the shared laughter, and she's having a great time playing these games...and just incidentally expanding her vocabulary and improving pronunciation.

With guacamole. Last night Mommy made guacamole. Vi loved it, and she quickly learned to say it. All day today, Pa and the kids repeated "sheep poop boots and pumpernickel pantyhose with guacamole."And laughed themselves silly.

Augie: Why did the chicken cross the playground?
Grandma: I don't know; why?
Augie: To get to the other slide.
Posted by Nancy/BLissed-Out Grandma at 12:44 AM 15 comments:

The Easter Bunny came to visit... 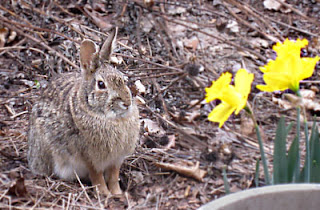 So Sunday late afternoon I'm back at my computer and something outside the window catches my eye. This guy settled in and sat perfectly still for nearly an hour, just blending into the background and gazing at the three remaining daffodils in my mostly still-wintery garden. Can't say whether he was admiring the view or hoping for a snack, but periodically I did a little window-rattling just in case. Eventually he went on his way. I suppose I could have been more generous, it being Easter and all.
Posted by Nancy/BLissed-Out Grandma at 4:36 PM 13 comments: