The date: April 15, 1985. At 10 a.m. my graphic designer and I met with the company that did the typesetting for our college's alumni tabloid. We had gotten our first computer at the office, and sent files of all the stories to the typesetter. The process should have been faster and cheaper than the old system, when typesetters had to retype everything into their machines. But they had messed it up, needlessly keyboarding a lot of stuff, introducing errors, and then charging us to correct their mistakes.

On this morning, the company's sales manager and account rep introduced us to a third person--a man who had joined the company less than an hour earlier. "He knows a lot about this process," they said. "He is taking over this department." He looked through the file, including my letter of complaint. "You're right, we messed up your job," he said. "We'll give you a five-hundred-dollar discount. And I promise that if you give us another chance, you won't regret it."

With that, the new guy asked the sales manager to take us on a tour of the plant. The first stop was called "the service center." It was a table on which incoming jobs were dumped. "When a guy--and they're all guys--oh, we had a lady once but she quit--is ready for more work he comes to this table and grabs a job." I rolled my eyes. So did the man who had just joined the company. We were both thinking, What, there are no women qualified to type? And wasn't that guy just a little defensive? Followed by Wow, they just pick up whatever job they like? What about priorities? Scheduling? (We know we were both thinking this because we compared notes later.)

The tour ended and the new guy offered to take us to lunch, to make up for our inconvenience on the job that had gone wrong. The designer and I accepted, and the account rep joined us. We went to a restaurant in downtown Minneapolis, the temperature got up to an unseasonable 81 degrees that day, and I was wearing my short-sleeved turquoise belted polyester dress.

We ate and talked, and eventually the designer and the account rep headed for the ladies' room. The guy and I continued to talk, talk, talk. He and his daughter had season tickets to the Children's Theater. I had season tickets to the ballet. He had been at Woodstock. I had beaten Bob Dylan in a talent contest. He'd been a hippie. I'd fancied myself a radical and voted for Eldredge Cleaver for president in 1968.

The designer and account rep finally came back to the table, and it was time to leave. I found out later they were wondering just what was going on between the two of us--the conversation was of no interest to them, and yet we were totally engrossed.

We've been celebrating the anniversary of our first meeting for 25 years now.
Posted by Nancy/BLissed-Out Grandma at 11:03 PM 24 comments:

Sights and sounds of spring 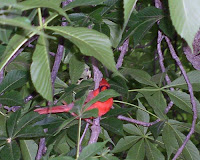 From the time I was a little girl, I've loved lying in bed in the morning with the window open, taking in the world through my ears. In the past few days I've been hearing the songs of cardinals and mourning doves along with various other chirping and squawking. And neighbor kids going down the sidewalk on roller skates and tiny bicycles with training wheels.

We've had an unusually warm spring thus far. I hope we have a temperate summer, because I hate closing the windows to run air conditioning. But in the spirit of "watch out what you wish for" I hasten to send a message out into the ether-verse that I also don't want to have to wear my winter jacket to the 4th of July baseball game!

This picture was the first photo I took with my first digital camera in 2003. My film camera had broken, and suddenly a family of cardinals was hanging out in our yard. I've never yet gotten a great cardinal photo, but I'm not giving up!
Posted by Nancy/BLissed-Out Grandma at 12:36 PM 22 comments: