Watching the eagles of Hornby Island 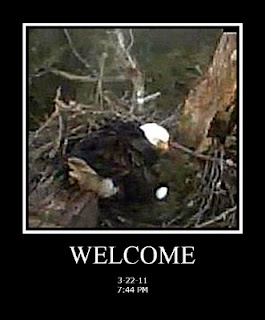 Watching a pair of eagles raise a family is another of those cool experiences brought to us by the wonders of video cams and the Internet. I got hooked last spring after DJan posted a link to the Hornby Island Eagle Cam.

Mom laid her first egg of 2011 on Tuesday evening. She is likely to lay another by Saturday. Wednesday afternoon, more than 1,000 viewers were watching, and more than 300 were logged into the chat room. Some will be there from sunup until dark for the next several months. I won't be there quite that much, but it does get to be habit-forming, especially once the eaglet pokes its way out of the egg, about 35 days from now.

Last year's story didn't end well. The healthy and active eaglet called Phoenix (the only hatchling in the nest) died suddenly of a lung infection, probably from eating tainted roadkill lovingly provided by her parents. But the cycle has come around again, and if you are interested, you can check out the YouTube video below (and sign up for updates) or the Hornby site, or both.

Two or three minutes into this video, Mom begins to make birthing sounds (who knew?). Then voila, an egg.


P.S., I just discovered this eagle cam at Norfolk, Virginia, where three eaglets have already hatched. They don't provide sound, but the video quality is excellent.
Posted by Nancy/BLissed-Out Grandma at 6:33 PM 13 comments:

Augie's preschool teachers take the children outdoors every day. A sign at the classroom door says "Inside Start" or "Outside Start," a signal to us (grand)parents to help the child dress accordingly. I had taught him to look for "I" or "O" on the sign, but one day he decided to sound out the whole word.

He was quiet for a minute and then he asked, "Grandma, is the 'O' silent?"

His teacher gave me a "He knows about silent letters?" look. He does, and he had realized that the word "outside" doesn't start with the traditional "O" sound. The next day I explained that there are pairs of letters that work together to make new sounds. The word "outside" is not pronounced "oat-side" or "oh-oot-side," because the two letters make a new sound. We found lots more "ou" words in stories we were reading, and I pointed out some other letter pairs. With his parents, he's been talking about "th," which also comes up a lot when you're sounding out words.

Some days he loves the sounding-out process. Other times he just wants to listen, to hear the story and let his imagination run and maybe snuggle close and hold somebody's hand while they read. It's all good.
Posted by Nancy/BLissed-Out Grandma at 6:00 AM 9 comments: 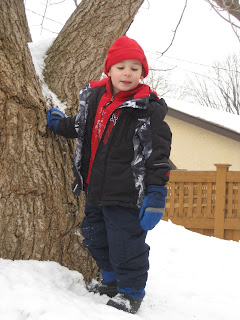 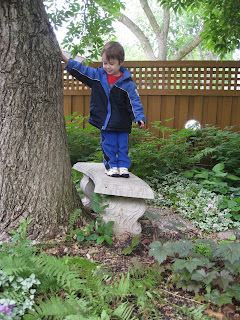 In any case, I'm so ready for spring!
Posted by Nancy/BLissed-Out Grandma at 6:00 AM 11 comments: