I was coming out of a journalism class at Marquette University when a couple of classmates bounded up the stairs shouting, “The President has been shot!”

I don’t think they said the word “dead,” or if they did I wasn’t going to believe it without knowing more. The students in question were editors of the campus newspaper, and they were headed for the closet where a venerable teletype machine clattered out breaking news. As soon as new information came across the wire, they would be able to rip the story off the machine. But I didn’t wait around. 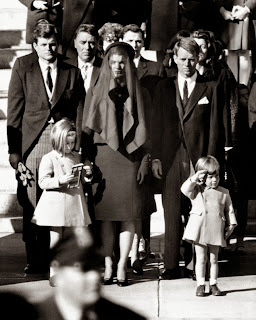 I walked in a daze to my dorm. I looked—maybe stared—at every person I passed, wondering whether they had heard the news. It didn’t seem that anyone had. I turned on my radio—it never occurred to me to go downstairs to the TV lounge where a group was gathering.. I listened, wanting answers that never came. How could this happen, in this country, in this day and age? That was the day my generation lost its innocence.

I left early Friday evening for a religious retreat, where we spent the weekend in prayer and silent meditation. By the time I got back to my dorm Sunday, Lyndon Johnson was president, Lee Harvey Oswald was dead, and Marquette had decided to close early for Thanksgiving. So I boarded a Greyhound for an overnight 14-hour trip home. The rest of the world had been watching television, absorbing heart-wrenching scenes and shocking details, and dealing with their thoughts and emotions. But I had been in two alternate universes—a retreat and a bus trip.

When I got home, the television was on. I saw JFK’s casket lying in state as people filed by in tears. I watched the funeral, learned the word cortege, was haunted by the riderless horse. I saw Jackie, Bobby, and Teddy striding down the street looking grimly determined and, I thought, angry. And why shouldn’t they be? Within days, Life magazine brought out a special issue; I rushed to buy it and I paged through it again and again, soaking in the photos. At a church bazaar the Saturday after Thanksgiving I heard some women talking about Jackie—how she had been so brave, how she hadn’t seemed to cry, how when you looked at the pictures you could see her sadness and you knew she had indeed cried. They were relieved to know she was real.

Through it all, for days and weeks, it stayed with me, a sense that something was terribly wrong. I know now that it was grief, pure and simple. Grief for a president I didn’t appreciate until he was gone, grief for his family whose beauty could not protect them from tragic loss, and grief for our nation, which no longer seemed so shiny and promising.

At the time, I thought something had changed. Today I would say Camelot was an illusion, that ugliness and privilege and corruption and violence were present behind the gauzy curtains and JFK’s death merely showed us what was possible. Pearl Harbor had been a shock for my parents’ generation, and the attacks of 9/11 would have a similar effect on my daughter’s generation. But that doesn’t change the fact that I was profoundly sad.

Today as I write this I recall details from 1963 and I recall how I was again brought to tears just a few years ago by exhibits and films at the Sixth Floor Museum at the old Texas Book Depository. Fifty years after John Kennedy’s assassination, I am feeling that same grief again. I am wishing that my grandchildren would never have to learn that the unthinkable can indeed happen right here in the USA. And I know that wish will not come true.

Posted by Nancy/BLissed-Out Grandma at 10:26 AM 15 comments:

On being silly (again)

I first posted this in October 2009, and I think of it often. It was my first introspective piece, on a skill I was happily incorporating into my life.

I don't know how old I was when my mother started telling me, "Don't be silly," and "Act your age," but by the time I was a teenager I had pretty much translated the message into "Be dignified at all times." The St. Paul Saints have a slogan, "Fun is Good," and once they sold a shirt that said "B Silly," but before I realized that it was the perfect antidote to my internal voices, it sold out. 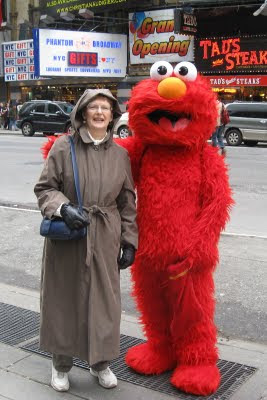 Still, I did learn to relax and take chances and let loose once in a while. And I've taken it to new heights with the grandbabies. I make up silly songs and do wacky dances and roll around on the floor and wear goofy hats (not to mention bowls and other things-that-aren't-hats) for their amusement and participation. Yesterday when Augie said, "C'mon, Grandma, jump on my bed with me," I did (cautiously, of course). A few months ago on a blustery day in New York, we went to the theater, but I also stopped to pose with Elmo (he was posing with tourists for a dollar). The kids were briefly VERY impressed. These days I think to myself, Darn it, Mom, I am acting my age.

Ironically, when my mom was 55 or 60, her older sister told her one day to "stop acting silly," and she was stung by the criticism. She did have a hint of a silly streak, and it was part of the reason people liked her. It helped her reach out to people, put them at ease, and generate a good time. At my 8th grade picnic at a lakeside pavilion, the jukebox didn't work so my mother started a rousing chorus of "Roll Out the Barrel." Kids loved it; lots of them got up and danced the hop-twice-on-each-foot ordeal we called the polka. On that day, I was embarrassed by her "silliness," but I was just-turned-14, so it doesn't count. If she were alive today, I think we'd both get silly with the little ones.

Bottom line, some silliness is good. Lots of silliness might even be better. Fun is definitely good. And while I'm all for ensuring children's safety and good behavior, I hope I never hear myself telling a child to "act your age" or "stop being silly." We need to be able to drop our pretenses sometimes, to let the inner child show through, to risk looking foolish, to try out ideas that might fail...or might succeed in unimaginable ways. B silly.

P.S. The kids are no longer babies, but we still dress up, dance around, play games. We may not be quite as silly as when they were tiny toddlers but we never stop ourselves because of embarrassment. To me, that's a big Win!

Posted by Nancy/BLissed-Out Grandma at 10:57 AM 14 comments: