Saying farewell to the Christmas season

The American Swedish Institute in Minneapolis this morning held a traditional Julgransplundring celebration. Translation: the plundering of the Christmas tree. Folks sang and danced around the julgran (Christmas tree) and made party hats and traditional ornaments. After a final dance, children “plundered” the tree of its edible decorations. 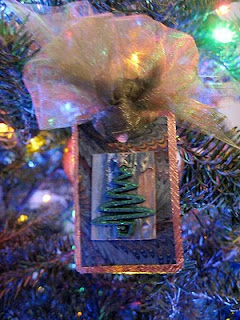 We happened to be taking down our tree while that party was underway. No singing and dancing here, thank you, but by our own tradition we did have the Christmas music playing. Each year on the Saturday after January 6, Peter takes off the ornaments and I pack them away along with other decorations. He hauls the tree outside and stands it in a snowbank near the bird feeders to provide a little shelter until the snow melts and the tree falls over (it will be months yet). We sweep up a bushel of needles and push the furniture back into place. I like that we do it together.

I used to be sad about putting away the trappings of Christmas. This year I'm okay with it, and quite satisfied to see what the next weeks and months will bring. As a newly retired person. I feel a kind of freedom I haven't known in many, many years. And a couple of loving and lovable children will continue to show up every morning eager to begin a new day with Pa and me. So farewell, Christmas season, and hello again, real life. Let's see what you've got.

One last thought. I've mentioned before that every ornament we use has meaning, and each year usually brings something to symbolize a new phase or activity. The lovely handmade ornament here came as a giveaway from the talented Jeanie at The Marmelade Gypsy, so now I have a beautiful symbol of my membership in the blogging community. Thanks, Jeanie!
Posted by Nancy/BLissed-Out Grandma at 5:41 PM 19 comments:

The other day Pa, Augie, ViMae, and I were watching some dance numbers from Singin' in the Rain. We let the movie run to the end, so we saw Don (Gene Kelly) dramatically declare his love for Kathy (Debbie Reynolds), and then a final shot of the two gazing at a billboard advertising their first movie as co-stars.

Pa explained that Don and Kathy were in love, which I think the kids knew. But they were happy to hear that the problems keeping Don and Kathy apart were resolved, and now they were going to be together and star in movies together.

Augie seemed to want to join the celebration. He turned to us and announced, "I'm in love with Grandma." A little embarrassed, he came over and buried his head in my shoulder and then cuddled up next to me on the couch. Peter gave me a look that said, "You are the luckiest woman in the world." My look said, "I know."

Today during quiet time, Augie and I sat together and watched most of the old Disney movie Fantasia. He identified all the orchestral instruments that can be seen during the first piece. During The Nutcracker, he said, "I love this music."

Twice during later pieces, he said, "I've tried to play this music." I asked how, and he showed me some drumming moves, like playing tympani.

We watched all the visuals, commented on the dinosaurs and the fairies and Mickey Mouse as the Sorcerer's Apprentice and the "bat monster" on Bald Mountain. But what we were really doing was listening to every note. He gets it. And he's not even four years old.

I got to spend part of my day with someone who is just as transported by music as I am, and who loves to sit with me to hear it. I am the luckiest woman in the world.
Posted by Nancy/BLissed-Out Grandma at 9:49 PM 16 comments:

One good calendar deserves another....

Last year it was the Men of York (Maine). Welcome now to St. Paul Firefighters 2011, keeping my city safe from flames. Their calendar benefits the Cystic Fibrosis Foundation and the Autism Society of Minnesota. Here is Jeremy, Mr. January. 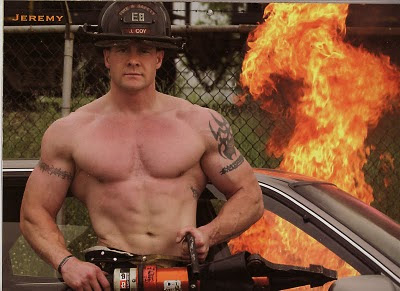 Happy New Year!
Posted by Nancy/BLissed-Out Grandma at 8:00 AM 16 comments: