Happy Halloween, and may the Force be with you 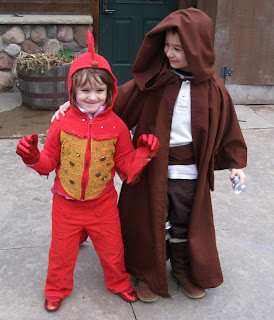 Grandma has been busy sewing costumes, which made their debut at the preschool party last Friday.  ViMae chose to wear her dragon costume from last year with a few new twists, and Augie decided to be a Jedi knight.

There is no longer a pattern for a Jedi robe, but I found some great tutorials online...it seems lots of people still make these for both kids and grownups. Augie knew that Jedi knights wore a hooded robe in any shade of brown, with an obi and a utility belt (for the light saber, of course). I learned that robes were not uniform, and that they were deliberately roomy in order to conceal the knight's face or belongings.

Meanwhile we "upgraded" ViMae's costume. Smaug, a character in The Hobbit, develops a gold-crusted chest from sleeping on his piles of stolen treasure. This year we added to the effect with gold-coin buttons she and I found in my 50-year-old coffee can button collection. We also added gloves on which I created bright claws. A spray of red and orange "flames" tacked to the palm of her left glove enables her to breathe fire, which she does ferociously. 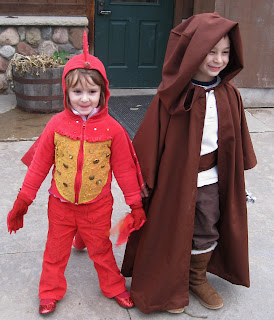 Three things strike me about these costumes. One, the kids chose them for the characters they represent, from stories they've come to love. Two, their Daddy happens to love The Hobbit and Star Wars more than they know, and that will be much more important to them some day than it is now. And three, I know that they will play with these costumes well beyond Halloween. (They both wore wolf suits based on Max and Where The Wild Things Are, made by their Grandma Anita, for years until they couldn't squeeze into them any more.) I hope that some day they'll tell their kids, and later their grandkids, about Halloween back in the old days when they were young and wore costumes made by grandmothers.

Posted by Nancy/BLissed-Out Grandma at 12:01 AM 15 comments: