Posted by Nancy/BLissed-Out Grandma at 11:37 PM No comments:

I keep meaning to print and frame some of my photos for a "winter garden," but this blog gives me a place to post them in the meantime.... 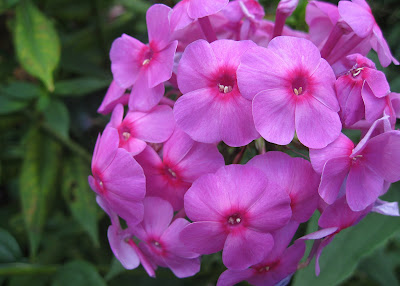 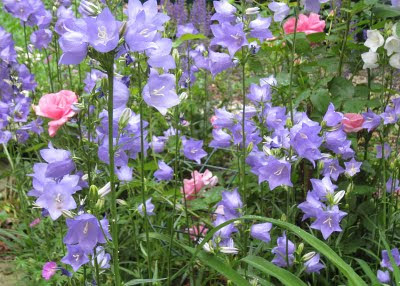 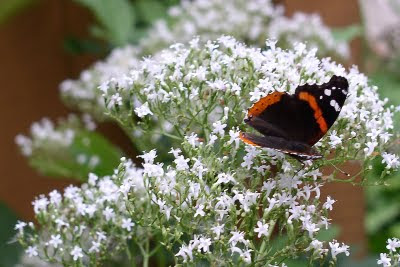 Posted by Nancy/BLissed-Out Grandma at 12:36 AM No comments:

On timeouts and unconditional love

We suddenly have a two-and-a-half-year-old who has discovered, to his joy and dismay, that when you say don't do that, HE CAN DO IT ANYWAY. Sometimes that's dangerous. And in general, nobody likes a kid who doesn't respect any rules. On the other hand, it took me 45 years to learn that when somebody said don't do that, I could do it anyway. Just like their parents, Pa and I want to feed the spirits of our grandbabies, not break them. Talking late last night, he and I agreed that the timeout system had resulted in a momentous struggle and bad feelings yesterday, and we need to find a new way. For example, at daycare, a timeout might be spent in an embrace and discussion, rather than in an enforced isolation followed by discussion. I don't know how The Nap Wars are progressing in my absence right now, but a few moments ago, this story about timeouts and unconditional love  popped up in the New York Times.
Posted by Nancy/BLissed-Out Grandma at 1:01 PM No comments:

Weeks ago, Peter decided to make Augie a baseball card to match the Saints set, and to have it ready the day the Saints set came out. We got a copy of the art (thanks, Jim) and spent a little over a week masking photos (me) and creating the card (Peter). We obsessed, because "anything worth doing is worth overdoing." 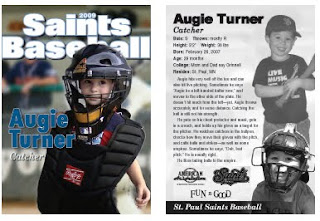 On the front is a photo Eric took on his cellphone one day when our friend took them into the dugout so Augie could try on catcher's gear (thanks, Lamarr).On the back, Augie is wearing the catcher's mask that Pa made for him. It's starting to show the wear and tear of a well-loved piece of gear.

The day the cards were given out, we got extra packs (thanks, Derek) and took two to the kids' house, with Augie's card slipped in. Peter tossed one pack to Eric, whose face lit up when he saw Augie's card. Meanwhile, Peter showed cards to Augie, who would name players he knew and then drop the card on the floor and look at the next one. "Alex... Kyle... Augie... Tony...." No big deal. Doesn't every kid have a card? Isn't Augie on the team? In fact, doesn't he own the place? 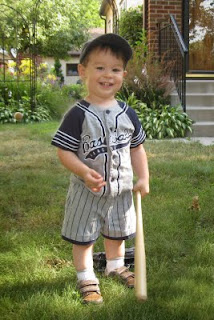 I'm also posting the photo I took in summer '08, which Pa used on Augie's "rookie card." It may be my all-time favorite photo. Of anyone. Ever. So far.
Posted by Nancy/BLissed-Out Grandma at 3:19 PM No comments: