Conversation a few days ago between hubby and our four-year-old grandson, Augie:

Peter: Come look at the tiny bird on the suet feeder. It's a little like a finch, but it has a red streak on its head.

Augie: It's a ruby-crowned kinglet.

Peter: No, I think a kinglet is some kind of water bird.

Augie (emphatically): No, a ruby-crowned kinglet is a coniferous forest bird.

Peter (skeptically): Get your bird book; let's see what it says.

And that's exactly what it was.

So now we've met a whole new variety of bird, a tad bigger than a hummingbird and less efficient at hovering. It is passing through on its migration northward. Males do have a reddish patch, but much of the time it is flat to their heads and cannot be seen.

I've been trying to get a shot of this active little guy, but so far he hasn't stayed around long enough. Photographing a ruby-crowned kinglet is now on my bucket list (I have simple wants). Meanwhile, I borrowed a photo from BirdForum.
Posted by Nancy/BLissed-Out Grandma at 5:54 PM 14 comments: 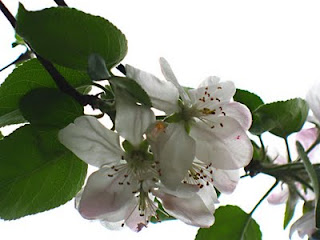 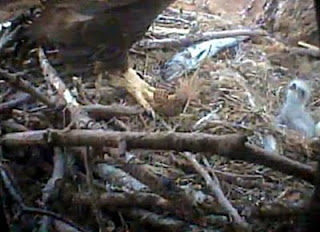 I'd really like the coming week to have fewer nasty surprises and more blissful moments. We're off to a rocky start with cold, gusty weather and Internet disruption. On the other hand, we were saying just yesterday that we are very happy with the life we've built for ourselves. So now that I'm back online, Happy May Day.
Posted by Nancy/BLissed-Out Grandma at 11:24 PM 16 comments: