I grew up as the oldest of six children. My sister is about four years younger than me, and starting three years after her birth my parents had four boys in six years. The first, Bruce, was smart and funny and very introverted. Until he left for college, he was pretty much inseparable from Keith, 14 months younger, also smart, and extroverted enough for the both of them.

Bruce sailed through engineering school and undertook a master’s. That’s where he ran into his first roadblock: his adviser left for a year, and Bruce could not complete his master’s project. I’m sure he didn’t make an issue of it; instead he found an engineering job at a paper mill in Michigan.
He was never one to stay in close touch with the family, but after a while he went incommunicado. Unable to reach him, my mother finally called the paper mill. She was told he no longer worked there. They connected her with the personnel department, where a woman did her a great kindness. “I can’t talk about confidential information,” the woman said, “but let me tell you what I can.” She said people had liked my brother, and that he wasn’t fired for misbehavior. The bosses were all engineers, she said, and engineers are not known for communication skills. Bruce was not the first bright new hire to need more help and guidance than he was given.

Losing his job was a shock for to my brother and to our family. Nobody had taught us that workplaces are not like classrooms. Assignments aren’t always spelled out clearly, criteria can be hazy, and you won’t always know the questions, let alone the answers. Bruce found another job, and another after that. He always waited until his money was running out before he started looking, and sometimes he cut it too close for comfort.

Then one day he got hired at a startup company making PUR water filters. They had a great story. Their new technology was more effective than anything on the market at the time. It could convert sea water to potable water; it could even pull a drink out of a mud puddle for someone in a remote location. Their first customers included the US Navy. One day a news story broke; a couple had been stranded at sea aboard their boat and had survived by cleansing sea water through their PUR filter. With the help of that story, the company’s founders talked their way into the household market. Business took off. The company grew. My brother was loving it. He received awards for developing new approaches to inventory control and distribution. He made friends, bought a little house, bowled in a league with brother Keith, enjoyed the occasional visit to the local racetrack, and happily joined the family three or four times a year for holiday gatherings.

One day Peter asked Bruce, “If money were no object, what would you do?” The answer: “Sit around in my underwear and watch television.” We thought that was a good answer. Happiness is being satisfied with what you have, loving what you do. And he seemed happy enough; he was extremely well-read, had opinions on lots of subjects, and never minded when somebody disagreed. He refused to take things personally.

Everything changed when the founders sold the business to Proctor and Gamble. Oh, the company survived for a few years, during which Bruce shook his head about various changes made by the “suits” from P&G. Then came word that the plant would close. All the jobs were exported to Mexico. My brother tried to be stoic about it, but I know it broke his heart. He was one of the last to leave; he was the one who knew how to disassemble the lines and ship everything out.

He looked for another job, without much hope of finding one. When funds ran out, he began to take small weekly withdrawals from his retirement funds. He stopped paying his utilities and began to live off the grid, using a windup flashlight and a sometimes cooking on a small charcoal grill. He was probably sitting around in his underwear, but he was no longer watching television. Except we didn’t know it. 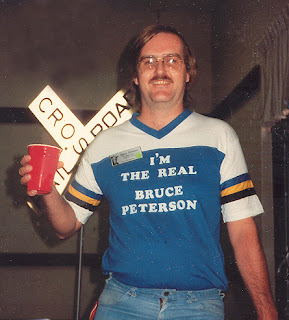 My brother Bruce had had a heart attack in about 1991, when he was 40. At the hospital, we’d heard the doctor’s advice: stop smoking, eat less fast food, get more exercise, take these pills. Over the years, he did seem to be eating more wisely and riding his bike a lot.

On Friday, September 15, 2006, he went to his bank to withdraw a few dollars for the weekend. He dropped to the floor, dead of a heart attack at 55. When we got his keys and entered his house, we learned the truth of his existence. That’s when we discovered that he had no electricity and no heat (we don’t know for how long). About three years of unopened mail was tossed on the floor near and under his bed. Books overflowed their shelves. There was a lot of dust, but no animals and no filth – it was not a garbage house. But it had problems, including the fact that the cold water in the kitchen sink was running full blast and couldn’t be turned off. Clearly it had spilled over at some point; floor tiles were lifted out and there was still the smell of mold.

Emptying Bruce’s house after his death, it didn’t take us long to find the very pills he’d brought home from the hospital 15 years earlier, plus the prescriptions, never filled. We also found cigarettes, and his reading spot reeked of cigarette smoke. We found bags of empty Mountain Dew cans, and new cartons in the kitchen. And a large bottle of aspirin.

Clearly (to me, at least) he knew the risks. He was having pains, had no interest in being medicated, and stocked up on caffeine and nicotine, two things that could help send him on his way.

He did it because he was depressed. He was running out of money and knew he’d never find a job like the one he’d loved and lost. Things around his house needed fixing, and although he had assembled an impressive supply of tools and how-to books, he couldn’t manage to do the work. I talked with my doctor about some of the things we found, and my doctor called them classic indicators of depression.

How could we not have known? 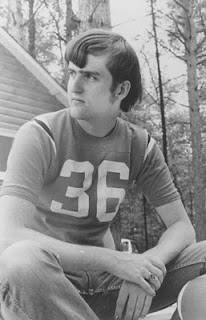 We held a celebration of his life a month later. We called all the numbers on his cell phone and located many former co-workers who considered themselves his friends. They all came, and they brought others, and they all told us how much they had enjoyed my brother. He was funny, a good story-teller, proud of his family, and very, very good at his job. The stories they told, and their obvious regard for him, were extraordinary gifts for our entire family.

Having been stunned by finding the hidden sad and dysfunctional part of his life, it was wonderful to discover the equally well-hidden happy and successful part. It makes me smile to think of it now. Except that I am angry – very angry – that an American company shipped my brother’s job across the border. Of course he’s just one among hundreds of thousands. This exporting of jobs is not good for the country or for the people to whom it happens. I wish I believed that all the other people’s stories turned out happier.

It has taken me a long time to write this, and to decide whether to publish it. The time has come. Bruce, I thought about you all this week. We miss you. Rest in peace.