Many years ago, I read a book of short stories by W. Somerset Maugham. I considered his writing tedious, but one story stayed with me and I found myself referring to it from time to time in the 40-or-so years from then to now.

Called "The Lotus Eater," it tells of a British bank manager who chucks his nondescript life and moves to the isle of Capri. He has calculated that if he lives simply, he can make his savings last exactly 25 years, at the end of which he plans to take his own life. He sees this as a reasonable exchange--a shorter life but a thoroughly enjoyable one, enjoying warm breezes, ocean swims, natural beauty, and endless leisure. 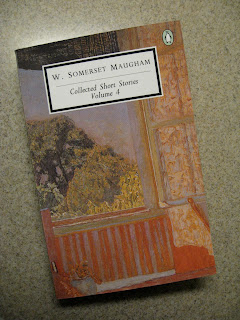 The story jumps forward, and we learn from a narrator that the man never got around to doing himself in. When he first ran out of money, his easy life continued; he had paid his bills promptly for 25 years and people assumed he would soon do so again. But eventually his credit ran out. Facing hunger and homelessness, he set fire to his tiny rented house with himself inside. He survived, severely diminished. The narrator suggests that the man's brain may have been damaged by smoke inhalation, but I prefer to think he was shocked and deeply disappointed by the failure of his plan. In any case, by the time he dies he has spent six years living essentially like an animal--scavenging for food, getting a few handouts, sleeping in a shed, running from  human contact.

So why am I telling you this not-so-cheerful story?

I have always thought that the moral of "The Lotus Eater" is this: Will power is something we need to exercise regularly. If we live too easy a life we may not have the strength of character to do the difficult thing when it becomes necessary. I don't know whether I really believe that, but it seems to be a metaphor for what I was writing about a couple of weeks ago: Since retiring I have resisted structuring my day, scheduling my tasks, living by a to-do list. Without that structure, I realized that I wasn't getting around to doing things that I did, in fact, want to do. (Far better things than killing myself, by the way.)

I was going to use this story when I wrote about New Year's realizations and resolutions. But I decided I should reread it to see how reliable my memory was. I'd made haphazard efforts to find it over the years, without success. This time I Googled it and found a Wikipedia entry dated just a few months ago. I learned that I'd had the title wrong (it's singular,  not plural), and confirmed that the author was Maugham and not Evelyn Waugh. The story is found in Volume 4 of Maugham's short stories, and Amazon sent it along within the week. Isn't the Internet a wonderful thing?

The person who wrote the Wikipedia entry seemed to believe that the man should have worked longer and saved more money to be certain he didn't outlive his means. In fact, that is what most of us do, or try to do. But by telling the story through a narrator rather than the protagonist, Maugham seems determined to let us make our own judgments.