Things could be worse....

This hasn't been the greatest week. I've had a sore throat all week, my dad was in the hospital for several days, hubby hurt his one good knee, water is leaking through the roof as snow and ice melt, we are socked in with clouds that begin at ground level, the squirrels have figured out how to empty two bird feeders despite new baffles, and my computer conked out again. Plus a few more things I'm not even going to mention.

I have to stop and remind myself that we're all fine, and for that I must be grateful. 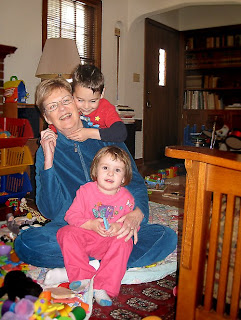 As far as we know, we have no major illnesses, just some kind of winter cold or flu that recycles among the grandkids, their parents, and Peter and me. Sore throats make me cranky, because (a) they hurt and (b)they represent failure. Hand-washing can't overcome all the sneezes and coughs, can't keep the kids from wiping their noses on my shirt, can't prevent them from taking food from their mouths and putting it on my plate. And really, I still want to cuddle them even when, in my mind's eye, they come to resemble those revolting germ images you see in ads for cold remedies.

For a man of 95, my dad has been in good health. Last summer he and my stepmother finally moved to an assisted living facility about 90 minutes from here (their home had been hours away). He was feeling weak and short of breath, so he was admitted to the hospital. His hemoglobin was low, so they gave him a couple of units of blood. After that, they began to adjust his medications. Each change created a new problem until things were properly balanced. He's been released to the nursing care wing of the same building where he lives, to rebuild his strength. His wife can be with him every day, and my siblings and I can see him much more readily than when they lived "up north." I drove up on Tuesday and spent time with him. He seems pretty happy and engaged, not at all ready to give up. I see this as both a warning and a gift.

Peter's knee injury is painful, but it seems to be a bruise that will heal. For his sake I hope so, because the other knee isn't reliable at all, and favoring the one just hurts the other one more. Meanwhile...

He's had to be up and down ladders indoors and out working to get snow and ice off the roof and manage the spots where water is seeping through, mostly in my office. Yesterday two aluminum mixing bowls filled with water drip-drip-dripping from the ceiling. At one point I leaned a few inches to my right to grab a document off my desk--and got two big plops of water on the forehead. News reports say just about every home in the region is getting some damage. The people next door had an entire room just ruined; a repair truck was there for two weeks straight. We are lucky to have minimal damage (right where we had some about 10 years ago). And we plan to have a new roof installed this spring, so we'll know exactly where attention must be paid.

We've made it to the end of January, which means the worst of the weather should be over, and even if not, February brings two birthdays and Valentine's Day. It can't be as drab and dreary as what I'm seeing today! And again, in the things-could-be-worse perspective, we are prepared for this stuff. Plus, as I like to say, this weather builds character.

My computer was out of commission for over a week. I have to spend some time restoring things to the way I want them, but the good news is I didn't lose any data. And this time, I had both an iPad and a borrowed laptop, so I could at least read mail and blogs, map my trip to see my dad, and such.

I was going to illustrate this post with a picture of nasty germs. Instead, I'm sharing a photo that Peter took not long ago. This is what it's all about.
Posted by Nancy/BLissed-Out Grandma at 1:15 PM 18 comments: