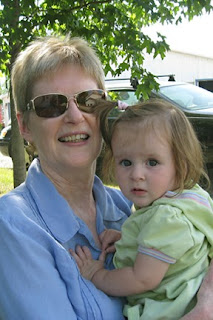 Lisa over at Grandma's Briefs is featuring me today as part of her series of "Grilled Grandmas." Nothing painful; I just answered a few questions about--well, you know, being a grandma. She and I would both enjoy having you drop in at her place, and I did try to say some things I haven't already said here.

My hubby's grandma became senile, and at least once she hung her panties to dry in the front window of their home. Every time I see Lisa's blog header I'm reminded of that story, but Lisa seems quite sound of mind. Really. Would I lead you astray?

We have just returned from a week at Star Lake in north-central Minnesota. The weather was fabulous, the resort wonderful, and the fishing fun if not very productive. We had no radio, television, or internet for the week...just the relaxed, away-from-it-all setting we wanted. Did we miss important news? You be the judge. 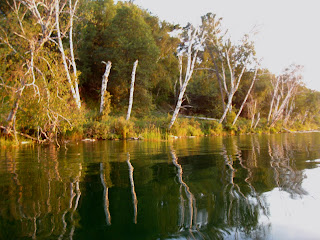 Family news. Monday evening as we sat in the boat on a very quiet lake, Peter's cell phone rang. It was Augie reporting with great pride, "I went poop in the potty." Given his past stubbornness on the matter, we are eager to provide all the encouragement and positive reinforcement we can muster. The next evening, "I wore big-boy underwear all day and it stayed dry." And the evening after that, "I wore big-boy underwear all night and it was dry when I got up." So each day, Peter congratulated him and celebrated this great progress, and then had a detailed conversation with Mommy about poop and pee. Since Mommy was also looking after our aging cat, there was additional talk about poop and pee of the feline variety.

To anyone on the lake overhearing these conversations, the subject matter must have been funny, disgusting, or at least odd. But we saw and heard other people, also fishing, also on cell phones. Iit made us laugh and shake our heads. At our old family cabin, we had no phone at all...no way to call in or out in case of emergency.  Now we're up-to-the-minute even in the wilderness.

Non-news. Five days into our vacation we had a meal out, at a bar and restaurant where the TV was tuned to ESPN. After five days without news, the one story we heard was: Bret Favre still isn't saying whether he will play for the Minnesota Vikings this year.They repeated this every 10 minutes, as if it meant something.

Good news. Once we emptied our suitcases and put away all the stuff we hauled north, we took a quick look at a few of the newspapers on the kitchen table. One headline jumped out: "A FREE MAN." Beneath, a photo of Koua Fong Lee. Whatever else happened in the world last week (and I haven't yet really caught up), this is wonderful news for me. Koua Fong Lee is a 32-year-old father of four who was serving an eight-year prison sentence for vehicular homicide. Driving his family home from church in a Toyota a few years ago, he came up a freeway ramp and began shouting that the brakes would not work. The car accelerated, striking that of a family stopped for a light; people in that car were badly injured and three died. Lee always maintained that he had been pounding on the brakes, and his family witnessed this, but his attorney decided it would be more persuasive to say he must have mistakenly stepped on the accelerator. Lee was found guilty and sent to prison two years and seven months ago. .

Daughter Number Three brought the case back to my attention with an initial post about the fact that investigators were taking a new look at his car, and a powerful update that prompted me to follow developments more closely. It seemed clear that even if Mr. Lee had mistakenly stepped on the gas, the charges and the sentence far exceeded those in more egregious cases. New reports were emerging about accidents attributed to Toyotas' acceleration problems.Then issues arose about irregularities in the trial itself. Public support grew for a new trial. A hearing on the evidence was granted. And last week, at the end of that four-day hearing, the same judge who had sentenced him ruled that his trial had been flawed in several ways and that he deserved a new day in court. He was still trying to comprehend this victory when word came that the county attorney would not retry the case. He was free to return home, to his wife and four young children. In her most recent post, Daughter Number Three says, "Let's hope something has been learned from all of this."

Future news. There is much to be learned. The case is likely to influence similar accident cases around the country. Meanwhile there are big questions about some actions of the county attorney's office, and about the trial that found Koua Fong Lee guilty despite lack of evidence. There are untold stories--still developing--of the families directly affected by the accident (the family of those killed in the accident supported Lee's request for a new trial, by the way). I hope good people will investigate and report on all aspects of this case, so our community can learn the necessary lessons. But meanwhile I celebrate that a man I never met is at home with his family tonight.
Posted by Nancy/BLissed-Out Grandma at 12:25 AM 16 comments: