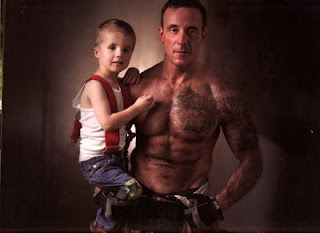 ...for the month of May. The older one is named Marc. They are featured in the St. Paul Firefighters 2011 calendar, benefiting the Cystic Fibrosis Foundation and the Autism Society of Minnesota. Photos are credited to Kelli Wencl, www.gingersnapshots.com, and I have to say I think they are pretty wonderful. Love the lighting on this one.
Posted by Nancy/BLissed-Out Grandma at 12:04 AM 9 comments:

A couple of weeks ago, a nesting eagle family in Decorah, Iowa, was nearly as ubiquitous in the national media as Charlie Sheen.

I don't know what it was about that particular nest that generated so much attention. It does have an excellent camera view and some experts who answer questions in a moderated chat. They have a big following in classrooms, and I'm guessing they also benefited from some excellent public relations contacts. They were already drawing tens of thousands of viewers while the parents incubated the eggs. From April 2 to April 6, when the first of three fluffy chicks began pecking its way out of its shell, as many as 150,000 viewers watched at any given time. On April 3, both NBC and CBS featured the nest and its popularity, and local stations across the country picked up the story.

In fact there are dozens of nest cams focused on eagles, peregrine falcons, owls, and other feathered friends. And there are people who watch day after day while young are in the nest. I've been known to watch a bit, myself.

Hornby Island  (British Columbia) is in full expectant-parent mode; there should be new hatchlings by the end of this week. The site, which got me hooked on eagle-watching last season, is notable for free-flowing round-the-clock chat, and a cluster of local experts answer newcomers' questions.

If you're eager to see babies, White Rock (British Columbia) has three fluffballs that are just days old. This site also has exquisite camera quality, both closeup and wide-angle. Got time on your hands? They are looking for volunteers to record nest observations.

Stop in at Decorah, Iowa, to see how quickly eaglets grow. Three weeks after bursting on the scene, they are gaining size and strength, showing some sibling rivalry, and looking a bit  like gawky little chickens with overgrown wings. Due to heavy traffic on the site, I never got into the chat room.

Norfolk, Virginia, had three fast-growing eaglets that hatched in mid-March. Sadly, just after I posted the original version of this entry, the mother was killed in a collision with an airplane landing nearby. The authorities concluded that the male could not rear these youngsters alone, so they have removed them from the nest and will raise and then release them. The site has news items and archives as well as a moderated discussion where experts answer selected questions.

There are lots more, of course, and each one has interesting - and sometimes dramatic - stories to show and tell. Eagles live a hard life, and watchers sometimes get their hearts broken when a much-loved eaglet (or parent) meets an early and tragic end. But in the meanwhile, there's a lot to enjoy, from eager peeps to healthy poop shots to the gentle way the parents tend their young.
Posted by Nancy/BLissed-Out Grandma at 10:12 AM 11 comments:

A funny thing happened on the way to the movie

We love old Fred Astaire movies. A few days ago Peter said, only half-joking, "We should watch Royal Wedding in the next week."

Knowing that there has already been a lot of William-and-Kate programming on US television, I said I was sure that one of the channels was enterprising enough to schedule it. So he checked the online guide, and sure enough, there it was. "Royal Wedding," starring Fred Astaire and Jane Powell, was listed on our public television channel Saturday, April 23, and Friday, April 29.

So on Saturday, I was surprised when I couldn't find it in the newspaper listings. I mentioned this to Peter, who rechecked the online guide. Aha! The listing now read "William and Kate: The Royal Wedding." We watched CSI: Miami instead.

It's not that I hate the royals. After all, we have a princess in the family. That would be ViMae, who at nearly three loves princesses, ballerinas, and fairies. She came in the other day declaring herself a princess and her brother a prince. "The princess wants to dance now," she said, by way of asking for help turning on the music.

I mentioned to her that a princess was about to marry a prince (not technically correct since she's a commoner, but that's beside the point); the wedding would be next week. Without missing a beat, ViMae said, "I can wear this dress!"

I plan to watch some coverage of the wedding. With any luck, the schedule will work out that ViiMae can watch a bit of it with me. And then we'll get a copy of Royal Wedding the move and watch Fred dance on the ceiling.
Posted by Nancy/BLissed-Out Grandma at 1:06 AM 18 comments: