The most clever birthday gift ever

One night last week as his family drove home from the baseball game, Augie announced that during the game he had thought of a great birthday gift for Pa. (His parents had been working on the idea of getting something the birthday person would like, not something you would like.) 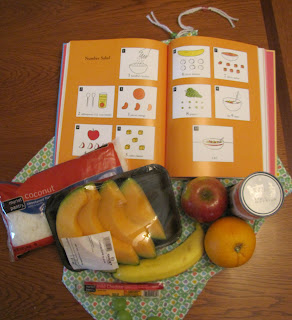 "We should give him his own copy of Pretend Soup (a children's cookbook) and all the ingredients to make Number Salad." Augie has his own copy but had never made this recipe. He was sure Pa would enjoy it.

His parents and sister agreed that was a wonderful idea. (Mom and Dad also marveled that he'd kept this exciting secret to himself while we were all together at the game.)

He proudly presented the gift on Sunday, and on Tuesday Augie and Vi made two batches of Number Salad for lunch at our house, sharing with Pa, me, and their mom (Dad was working). 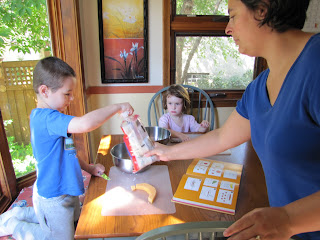 The recipe begins with one handful of coconut and two tablespoons of orange juice concentrate. "Handful" is a subjective term; Augie pulled out at least 1/3 cup while Vi daintily withdrew about a tablespoonful. The beautiful thing: It doesn't matter! 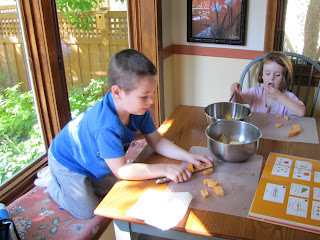 Then you cut, count, and drop in 3 orange sections, 4 apple slices, 5 cubes of cheese, 6 banana slices, 7 pieces of melon, and 8 grapes. (Having put in the specified number of pieces, or any number you like, you can eat the excess.) 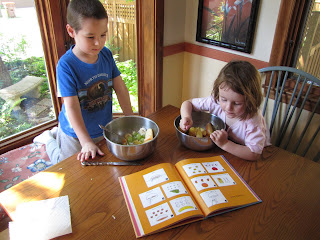 As you stir ("9 times"), the coconut and orange juice concentrate form a dressing - a pretty clever idea if you like coconut (we liked it more than the kids did). 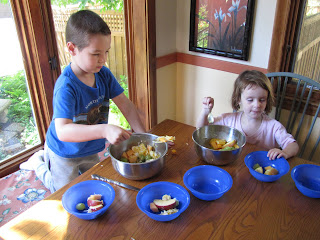 The kids dished up Number Salad for lunch. Two batches was more than enough (we were still full from breakfast) so Pa and I had the rest with dinner.

We have many other wonderful recipes to try, as we continue to enjoy Pa's birthday gift. Timing is perfect; Peter had just mentioned that he wanted to involve the kids more in meal preparation this year.

Pretend Soup, by the way, is by Mollie Katzen, author of Moosewood Cookbook, and Ann Henderson, a preschool teacher. All recipes are kid-tested. Grownups do the difficult steps; kids use table knives for any cutting they do. They participate in lots of cooking at home, and they are very proud of their efforts. I wish I'd had that opportunity as a kid, but more than that, I love that they do.

The guy who taught me to fight City Hall

When people grow up in New York and then move to Minnesota, they sometimes can't avoid stepping on people's toes. New Yorkers are used to interrupting, moving fast, talking loud, and having a certain boldness that Minnesotans often perceive as pushy and arrogant.

If they use these traits well, they can get a lot of things done. In the recent past, two such men became mayor of St. Paul, one was chosen as president of the University of Minnesota, two went to the Senate, and one saved a historic carousel whose horses were already removed and scheduled to be sold at auction.

The latter is my husband, Peter. He used his New York skills, occasionally tempered by my "Minnesota nice," to negotiate the purchase on behalf of our nonprofit organization. Then he used his story-telling talents to raise nearly $3 million to pay for the carousel, restore it, and get it situated in St. Paul's Como Park. We were not rich, famous, or powerful. Instead, we did our research, made proposals, forged partnerships, drove the message through dozens of media interviews, and took on a huge amount of volunteer work while doing our regular jobs. I would have given up several times; his will-power kept us going.

Eventually, the New York-born mayor at the time tried to wrest control of the carousel and place it downtown, where it would have died a lonely death. We fought City Hall, and we won. Among the things that made us effective were Peter's vision, determination, intense preparation, hard work, and, oh yes, being willing to offend a few people along the way. He told people the truth as he saw it and did not worry about being liked. When the mayor summoned us to a meeting, rolled out maps of a revitalized downtown, and waxed poetic about his vision (for which he intended the carousel as a centerpiece), Peter said, "Well, Mr. Mayor, not everyone shares your vision." There were gasps around the table.

As a Minnesotan raised to be a people-pleaser, I learned from Peter to speak up for myself and to take a few risks to accomplish something important. As I became braver and more confident, he smoothed his rough edges and added new strategies to that of confrontation. Collaborating on one cause or another, we get a kick out of how well we work together. We call it "Being Peter and Nancy."

Way back when we were getting to know one another, he told me, "Lots of adults don't like me much, but children love me." Well, lots of adults like him, too, but he was right about the children. At Saints' games, for example, children would regularly come to chat and ask him to read them a story. He always obliged, only pausing to mark each batter's activity in his scorebook.

Maybe all of that was practice for being a grandpa. He is a great one. It was his idea to provide daycare until the grandkids are in school. As with the carousel, I took my cue from him and now we are a great team. Peter and Nancy. Pa and Grandma.

In the summer, when the kids are not here every weekday, it's Pa that they ask to see. For example, just the other day ViMae was getting weepy at the breakfast table. "Mom," she said, "I miss your dad." (Yes, they've been working on figuring out extended relationships.) They called so Vi could talk with her grandpa, and then they came over for a play date.

When Peter was 19, he was diagnosed with lymphoma. Doctors told his mother she'd better have his big "turning 21" party a year early because he wouldn't live to 21.

Today, August 14, 2011, he turns 63. Or, as he put it the other day, three times the age he wasn't supposed to see. It turns out he didn't have lymphoma at 19, although he did have it at 58. We were lucky; surgery took care of it. I'd like to say I hope we have at least another 21 years together, but we are a little superstitious about "watching what we wish for," so I won't say that.

Happy Birthday, Peter. I'm so glad I met and married you...glad we are Peter and Nancy, Pa and Grandma. I hope you and I have many more years together, and that we enjoy them all. It's because of you that I am a blissed-out grandma.