If you're a fan of The Hobbit, you know that Smaug is a dragon who spends a lot of time lying atop his enormous pile of stolen gold, until his chest is almost entirely encrusted with gold.

ViMae's Daddy has passed along his love of this story, and she decided to be Smaug for Halloween. "Maybe a nice Smaug," she says. Still, she wants to breathe fire and scare other children.

We started with a red hoodie and pants, and I built the whole costume on the hoodie.I posted some sneak peeks here.

She was very specific: There had to be gold, jewels, and long, "mean" wings. I bought stick-on jewels at the fabric shop and she applied them. 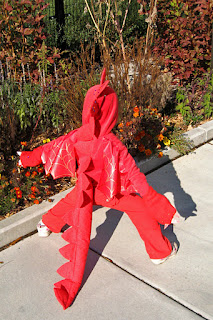 I glued some pointy wings to the sleeves of the hoodie and drew on them with a gold pen. (ViMae was planning to fly from door to door trick-or-treating; Pa and I were careful to tell her these wings are just pretend.)

She loves that the tail swings when she walks, and in this photo she is admiring the shadow of her spikes, wings, and claws. Pink claws.

Augie decided to be Bob the Builder. Not surprising for a kid who owns a full-size tool box, hammer, screwdriver, and metal measuring tape, and who spends lots of play time constructing roads, houses, zoos, castles, etc.

Peter and I scouted up the necessary garb including "work boots," and Peter fashioned a tool belt using his own father's WW II ammo belt.

Augie brought goggles and some toy tools. The minute he put on the goggles, he was the proudest builder in the universe. He kept them on for hours. 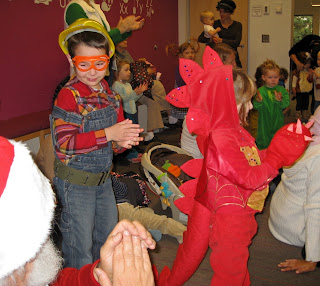 Our trial outing was to the library for story hour Thursday. We knew from last year that lots of children would be wearing costumes. (Pa was the only grownup wearing one: his red sweater and Santa hat.) 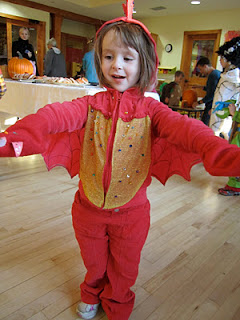 Friday evening, the kids and their mom and dad went to a preschool party. These two photos are from Mommy's blog: she reports that ViMae did a lot of fire-breathing, and Augie stayed in character all evening. No surprises there! 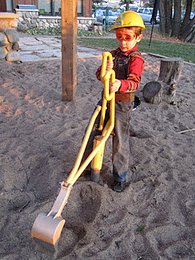 A comment on another blog said the real test of success for a costume is how the child feels wearing it.By that standard, these outfits seem to be a real success, and it's the most fun I've ever had celebrating Halloween.