Me: The people organizing the Olympics opening ceremonies invited Keith Moon to come and play the drums. I guess they forgot that he died in 1978.

Augie: Can you get to the Olympics on an airplane? I’ll ask my Mom and Dad to take me there, because they need a drummer.

And in other news…

I’m free! After two months, I can throw away all the devices I relied on to get around, and walk on my own two feet.

I have jettisoned the bulky fiberglass splint I wore for a month. (It’s called a Cadillac splint. When I said it didn’t feel much like a Cadillac, the orthopedist said, accurately, “You’ve never tried the other kind.”) I have put away a bag full of elastic bandages that held the splint in place, and the lace-up and wrap-around boot that braced my ankle for three weeks after the splint. We’ve hung up the crutches and returned the rented wheelchair.

That only leaves me with an elastic band for ankle-strengthening exercises, and some overall exercises to get back my energy and muscle tone. Amazing how they ebb away when one is sitting around being a good patient. My fibromyalgia acted up during that time, too, but when I finally recognized the symptoms I stopped eating so much sugar and restarted some vitamin and mineral supplements I hadn’t needed for a while, and I started feeling better.

Then I got a nasty surprise. I found a couple of red marks on my lower back, each with a slight bullseye pattern. I hadn’t been anywhere associated with ticks, but Lyme disease is the last thing I need, so I saw a doctor that same day. She ruled out Lyme and thought it might be pressure sores from sitting around so much. But she also decided to test for shingles. Shingles? She thought it very unlikely. The tests came back. Shingles. I hope I’m not tempting the Laughing Gods of Retribution by saying that it's a very minor case, compared to what I see on the Internet. My only discomfort is a few tiny shooting pains (like electrical charges) and some fatigue. I started on acyclovir early, so the doctor says I may avoid the pain that many people get long after the little red marks have disappeared. I hope she’s right. (She also says the shingles vaccine doesn't guarantee that you won't get shingles but it might help reduce the severity. I was going to get the vaccine after my leg healed. Don't need it now.) 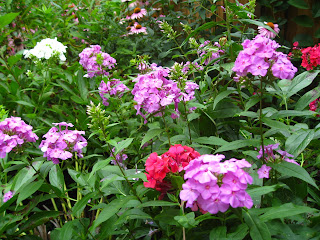 The weather is better (slightly lower temps and much lower humidity), and now that I can walk I am able to begin tending a garden that needs, at the very least, some major weeding. The Olympics are about to begin, and we have some nice family activities planned. Life is good.

I hope the same is true for you.