Ten years ago, 80 percent of New Orleans--a city I love--was underwater. Most media covered it as an unavoidable catastrophe: the storm surge overpowered the levees, and who could possibly have expected this? So we thought it was a natural disaster, and we blamed the resulting devastation on Hurricane Katrina.

Television brought us heartbreaking images and stories—elderly residents abandoned to drown in a flooded-out nursing home, families making their way through foul waist-high water, thousands stranded on rooftops and bridges and in the Superdome and at the convention center, baking and some dying in the hot sun. (I've avoided using the most shocking images here.) 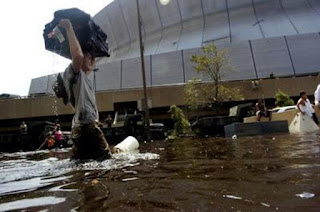 The story was still unfolding two days later when my husband Peter and I went to see New Orleans’ own Dr. John at a local jazz club. We had seen him several times before, but this time he was heartbroken, and angry. He was still trying to locate friends amid the chaos. And he was giving interviews with a message: Don’t blame Katrina, blame the people who knew for years that the levees were falling apart. The Army Corps of Engineers and the city’s own government knew that the levees couldn’t hold against a truly strong storm, and they let it happen. Dr. John performed a brand-new song about lies and betrayal, and eventually he produced an album full of protest songs,“City that Care Forgot.”

Thousands of homes were uninhabitable because of water damage, toxic mold, and lack of utilities. We heard that FEMA would bring in emergency trailers. There was a supply of trailers available nearby—in Mississippi, as I recall. They were locally built, so if FEMA used them and ordered more, they would be boosting a regional economy also disrupted by hurricane damage. Instead, FEMA held out for trailers that would be built in Alaska and transported to Louisiana. When I heard that, it dawned on me: They are stalling so their friends can get into position to profit from this. Just as Halliburton got excessive no-bid contracts in Iraq, a fleet of out-of-town contractors would profit from exceedingly favorable treatment in the cleanup and redevelopment of New Orleans. 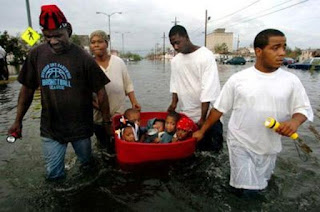 Years passed before the stories came out about how greed and corruption did, in fact, prolong the suffering of people trying to recover from the storm, especially the poor and non-white. Rebuilding the poorest and most damaged parts of town took a back seat as developers, investors, and government officials focused instead on more profitable business and tourism projects. City officials pocketed payoffs and traded favors; former Mayor Ray Nagin was sent to prison. Tens of thousands of residents who had fled the city did not return, largely because they no longer had jobs or places to live. In the process, the city lost a perceptible share of its distinctive multiethnic culture. 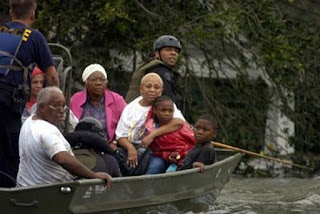 Peter and I had visited N’Awlins three or four times before the flood. He fondly recalls a locally born cabby who briefed him on his first visit, including where to go, what to eat, and to be sure to order your drink in a go-cup so you can take it out on the street. When we took an interest in crawfish etouffe, wait staff at every restaurant could explain the recipe and technique that made theirs unique.

When we visited this past April, our cab drivers were seldom New Orleans natives; during Easter Week a nice young man from Jordan asked whether we could explain the Good Friday tradition. The wait staff at one Cajun-Creole restaurant was entirely Latino and at another entirely southeast Asian, seemingly imported from elsewhere when a restaurant reopened or changed hands. They provided competent service, but they didn’t know beans about rice and beans. Something similar must have happened in the kitchens; traditional New Orleans food was simply not quite as rich and tasty as it should have been. The problem is not the addition of new ethnicities; it is the decreased presence of those who, like generations before them, shaped the remarkable culture unique to New Orleans.

Of all the expressions of New Orleans culture, music seems to have survived best. Some of the city’s most successful musicians (the Marsalis family, Harry Conick Jr., Dr. John and others) banded together to support the many musicians who were wiped out, and often forced to flee, by the flood. They raised money, built a musician’s village through Habitat for Humanity, established a music school for city children, and kept on playing. New Orleans music is not just an art form, not just a tourist attraction, it is vital part of life. The spirit of second-line parades and “Indian” parades, together with New Orleans jazz, blues, zydeco, and the rest, give a sense of the culture and strength that brought the city’s people through the flood and its aftermath. 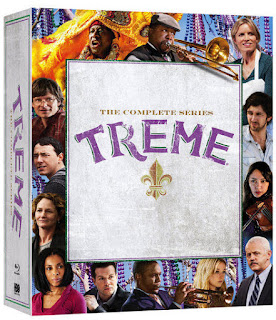 In case you’re interested, a remarkable HBO series called Treme gives a fascinating picture of post-flood life in New Orleans. Well researched, well written, and cast with wonderful actors, it humanizes the issues and spotlights the city’s music with live performances from a wide range of the best musicians. It’s available on Blu-Ray. I can promise that watching it will be much more fascinating, enlightening, surprising, disturbing, and ultimately inspiring than the feel-good ten-years-after pieces we’ve been seeing in the media the past couple of weeks.
Posted by Nancy/BLissed-Out Grandma at 4:44 PM 6 comments:

TBT: Being thankful for every day

Today's Cryptogram was "Write it on your heart that every day is the best day in the year." It's Ralph Waldo Emerson (not LL Cool J, who apparently posted it on his web site recently). 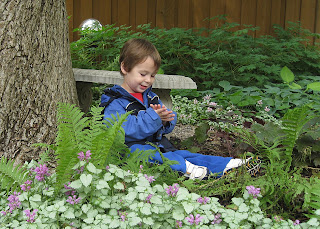 Just yesterday I was thinking about the fact that being grateful for each new day is one of the better pieces of self-help advice I ever got. Habitually making the conscious choice to appreciate what you've got changes your approach to the day. I notice it in my responses when greeted with "How are you?" Old responses: tired, overworked, hate the weather, I have this ache.... New responses, at least some of the time: great, love this sunshine, too busy but glad to have a job in this economy, and of course the newly popular, having the time of my life being a grandma.

That single change makes things go better, and it's a bit of a gift to others, too, since negative energy sucks the life out of everyone around. Being open--loving life, things, people--makes us grow existentially; we expand to incorporate in our being that which we love.

I was thinking about these things last night while I couldn't sleep (which made today's Cryptogram a timely surprise). I started thinking about the prayer we were taught to say as children: "Now I lay me down to sleep, I pray the Lord my soul to keep. If I should die before I wake, I pray the Lord my soul to take." My mother assured me that I was asking God to watch over me, but it sure seemed that I was inviting someone to snatch my soul in the middle of the night. What a creepy thing to teach a child. What did we learn from this recitation, except fear? How did it teach us to be good little people?

So at 2 or 3 a.m. I asked myself, "What prayer would I teach a child, if I were going to do such a thing?" I decided it would be something like, "I give thanks for this new day; please help me use it well." And later in the day, "Thanks for all the good things that happened today." And then we'd talk about good and not-so-good things from the day that offer teachable moments. 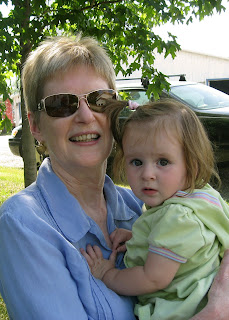 When Peter woke up too, I mentioned this, and we agreed that these are messages Augie and Vi are already getting. Mommy Abby is effusive and animated about pretty much everything they do and see in the course of a day, and any little gift or kindness that someone extends. They can't possibly just take things for granted when she is so relentlessly appreciative. I talk to Augie about this beautiful day, the beautiful garden, the wonderful sunny day... and now we hear him express his own appreciation of beauty...that's a beautiful cat, look at all the beautiful flowers, etc. And we all celebrate the kids' achievements, letting them know how clever, funny. strong, talented, beautiful, kind, and loving they are.

I sometimes have wondered whether we confuse the quest for happiness with spiritual growth. But I have no doubt that these life-affirming, positive, confidence-building messages are totally superior to anything I got from the Catholic Church of my youth. When happiness is based on authentic appreciation of what one has and is and does, it will produce children (and grownups) who are far more fully developed individuals, in pretty much every dimension, than we ever were. As for me, in my new-found blissed-out state, I am a better person than I have been for a long time!
Posted by Nancy/BLissed-Out Grandma at 5:18 PM 8 comments: