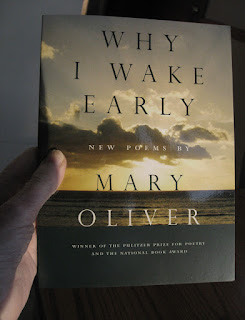 Blog friend Teresa Evangeline often posts poetry that really moves me. Through her I learned of Mary Oliver, whose luminous poems tend to delve beneath the surface of the natural world and find the beauty not only in appearance but in function.

A few weeks ago I bought a book of Mary Oliver poems for myself, a small collection published in 2004 called "Why I Wake Early." The title is for me either ironic or aspirational, since I have never been an early riser. Still, I recognize that nature is often at its best in early morning, and that I am looking for new sources of positive energy, so this book seemed promising.

The poems are lovely, and I will post the first one, which has given the book its title. If you decide to skip over the poem (gasp!), there is more to my story after the poem.

Why I Wake Early

Hello, sun in my face.
Hello, you who make the morning
and spread it over the fields
and into the faces of the tulips
and the nodding morning glories,
and into the windows of, even, the
miserable and the crotchety--

Watch, now, how I start the day
in happiness, in kindness.

I decided to read this poem to 4-year-old granddaughter ViMae, just to see how she would respond. She liked the idea of saying hello to the sun, and she agreed that it reaches out and warms you whether you are cheerful or, as the poem says, crotchety.

At that moment, before I could get back to reading, she took a flight of fancy, pulling the sun into her own life. It was just a couple of sentences, but it struck me, instantly, as a vibrant response to this poem I was sharing with her. She didn't really mean it as a poem; she told me later it was a real plan and she's really going to do it (she's also really going to have a pet dragon). But she agreed that I could write down what she had said and share it on my blog. She helped choose the photo and fix the layout, and I hit "publish." You can read it here.

But I left out the context. I loved the fact that ViMae responded to a poem by imagining an action, and even planning for a soft landing. I'm glad I wrote it down. As I continue to read and reread these poems, I'm going to be less satisfied with a cerebral response. I'm going to set my imagination to the task of bringing the poem to life...to my life.

You can learn a lot from children.

a poem by Vi 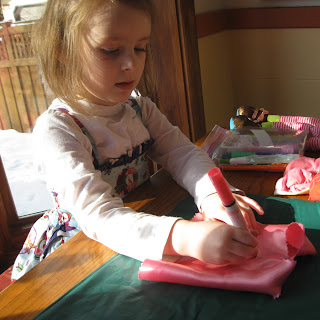 When the sun comes up
and it's in our alley

I'm gonna grab it
and get a ride up.

And then I'll bounce back up.
Boingy, boingy, boingy.
Posted by Nancy/BLissed-Out Grandma at 10:58 AM 9 comments: