Let's face it, since I retired I'm really not into goal-setting, scheduling, achieving, etc. Especially during the summer, which is my vacation from childcare for the grandkids. But Monday, they come back to begin a new season, and I am not ready. 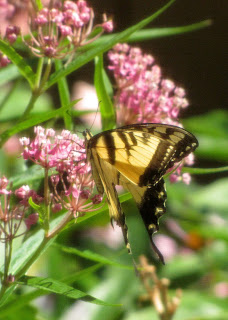 I've had two months to finish painting my office. I still have two doors to do after the dreaded painting fiasco, and they're not going to get done by Monday. I have boxes of papers and knickknacks that I brought home from my workplace last December. And other boxes of papers and knickknacks that have been packed up since the painting project and need sorting. I do NOT want to just throw all this stuff back where it was; I want to sort and toss and recycle.

But I keep being distracted. One, I get drawn to the computer to read blogs. And two, there's this garden just outside my window. It calls to me in many ways. 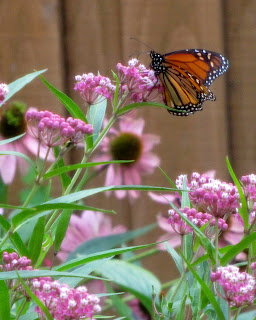 It seems to be a banner year for phlox, and I have four different varieties all blooming their heads off. They are sending out a powerful scent, almost overwhelming. It makes me want to, I dunno, dance or daydream or gaze out at the flowers. Anything but paperwork.

Second, for the last couple of weeks I've been visited by butterflies, especially monarchs and tiger swallowtails and the little white ones whose name I never remember. With the window open I often hear their wings flap before I even see them. Then I am compelled to watch, and to pick up a camera and see whether I can capture some photos that top the ones I've already taken. 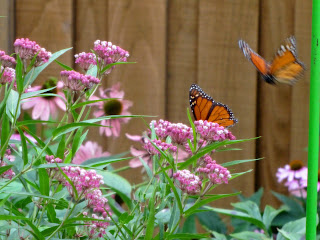 There also seems to be increased bird activity all around us. Goldfinches have been coming to the black-eyed susans that have volunteered themselves from the back yard into this pink-and-purple spot outside my window. Other finches follow, and I hear cardinals and other birds just out of sight. I'm forever pressing my face against the screen and craning my neck trying to spot the source of a tsk or a call. But they elude me, and my camera. Just as well. I have paperwork to do.

Our daughter Abby has been making greeting cards since she was a kid. Using colored markers, glitter, stickers, and more recently photos, she creates cheerful, heart-warming messages for birthdays and various holidays. I sometimes come across one that I used as a bookmark, but mostly they are with the cache of cards that I've been consolidating, little by little, in my office. 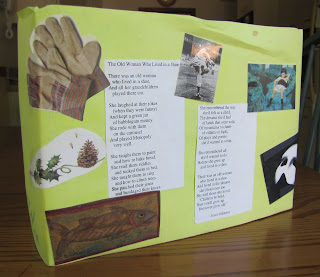 In 1996, when she was a sophomore in college, she used her card-making skills to create a Christmas gift. It's a display piece that features cut-out illustrations of some of my favorite activities: gardening, baseball, art (or does that one represent lounging?), theater, fishing, and Christmas. It, too, has been in my office, but like everything else it was packed away while the ceiling was being repaired. I just pulled it from the box moments ago.

I love that the photos still represent my interests, except of course for the grandkids. But then I read and rediscovered the poem. It was lovely at the time. It's even greater now.


The Old Woman Who Lived in a Shoe
by Joyce Johnson

There was an old woman who lived in a shoe,
And all her grandchildren played there too.

She laughed at their jokes (when they were funny)
And kept a green jar of bubblegum money.
She rode with them on the carousel
And played Monopoly very well.

She remembered the way she'd felt as a child,
The dreams she'd had of lands that were wild,
Of mountains to climb, of villains to fight,
Of plays and poems she'd wanted to write.

She remembered all she'd wanted to do
Before she grew up and lived in a shoe.

There was an old woman who lived in a shoe
And lived in the dreams she'd had once too.
She told those she loved, "Children be bold.
Then you'll grow up but never grow old."

And that is exactly the message I want to give to those I love.