I first met him five years ago, on February 26. He looked at me as if I were the only person in the room. In fact, he did that to everyone, and it made me love him even more.

His name is Augie, and he was my first grandchild, the one who taught me how to live in the moment, immersed in love. He's been coming to our house for daycare since he was three months old, and the desire to join him and "Pa" started my transition to part-time work, and finally to retirement.

As Augie turns five, he is smart, funny, loving, curious, imaginative, and passionate about wild animals, words, drumming, and Legos. He reads signs, books, newspaper headlines, ads, and birthday cards. Sometimes at preschool a parent comes in to read a birthday child's favorite story. Last Monday Augie's daddy was there, but it was Augie who read the story. Wednesday when his class made lemonade, Augie recited the lemons-and-sugar poem he'd created a couple of weeks ago. Having once made it up, he's got it in his memory, probably forever, along with song lyrics and facts about birds of Minnesota, dinosaurs of the Jurassic Age, and animals of the African savanna. 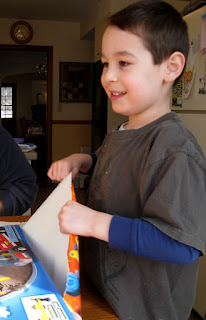 Not surprisingly, when a child is so curious, self-starting, and focused, he can also be strong-willed. His fifth birthday has been used as a teachable moment to work on "listening" when parents, grandparents, or teachers tell him to do something, and being more responsible (come when called, be more careful not to spill orange juice and cereal, use words instead of force to resolve conflicts with little sister). Each of the past few weeks, he's a little more mature than the week before, and a little more repentant when the temptation to, say, unroll all the toilet paper is too strong to resist.

Peter and I often talk about the need to help a child function smoothly in the world without breaking that child's spirit. Like their parents, we want to help our grandchildren play within the rules but be able to question assumptions, think creatively, stand up for themselves. Peter helped Augie's mom become a spectacular example of that. It's not an easy process, but it's so worthwhile.

One of the privileges of being five is that Augie's party included not just extended family but also several friends and their parents, and it was held at an indoor playground instead of at home. He was a gracious host, greeting each guest, leading people from the playground to the party room, asking whether people were ready for cake, and thanking each family for his gifts. It was interesting to watch him take charge, deciding to sit front-row-center "so nobody wonders where the Birthday Boy is," and momentarily attempting to assign seating (a challenge for any party-giver!). 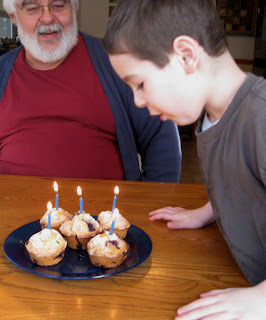 As usual, Peter and I spread our birthday celebration over a week. Peter made Augie's favorite breakfast (scrambled eggs with cheese plus sausage and English muffins) both pre- and post-birthday. We stuck candles in blueberry muffins and sang Happy Birthday--Vi as a cow (moo-moo-moo-moo-moo-moo), Pa as a chickadee (chick-a-dee-dee-dee-dee), me as an English-speaking human. Augie and Vi both got new Lego sets, and we've spent many hours playing with them.

It's taken me a long time to finish this post, and not just because I was under the weather. I love this boy, and I cherish each day with him. Being five means that in the fall, he'll be off to full-day kindergarten instead of here. Last week he began talking about helping Grandma in the garden next fall. Pa reminded him that he'll be in school every day. For a moment, Augie lost his smile and reached for both our hands. I quickly promised that we will arrange times for him to come and help me in the garden. I suspect that by September he'll have new things on his mind, but for now, we both need to feel reassured that we'll continue to have golden time together.