On Memorial Day I wrote that my dad was away at war from the time I was 8 months old until I turned two. The family photo album contains black-and-white photos showing my mom, grandma, aunts, and cousins. Society as I knew it was run by women.
Then a man came home, this stranger with a deep voice who walked into our house and acted like he belonged. What’s more, my mom and grandma acted like he belonged. (Let me quickly add that my dad was a respectful, even-tempered guy. But to my two-year-old self, he barged in and disrupted our lives, and of course he took away my sense that everything revolved around me.)
I’ve had issues with male authority figures ever since. As in, Who does this guy think he is? Why doesn’t he respect that I know what I’m doing? As I write this I can feel the creeping resentment I have felt toward so many male bosses. Women, fine, I can work with them. Men seem like they’re…barging in.
I was dealing with an especially large dose of this resentment in the mid-1990s. I reported to a boss who was in way over his head. I tried to give him helpful information and advice, but he didn’t know enough to take it. He wasn’t sure he wanted to keep me around. One of my benefits was free tuition for my stepdaughter at a great college. It would be a year until she started, and I was determined to hang on until she graduated. With my hubby’s coaching, I handled the situation. But I always had to be careful and act respectful, and sometimes I wanted to explode.
One night at a baseball game, I found release. The umpire made what I thought was a good call. The rival manager strode onto the field to complain. The crowd was yelling at the manager to get off the field, and yelling at the umpire to throw him out. I joined in. I climbed up on the seat and screamed as loud as I could. I kept it up as long as the two men kept arguing, as long as anyone in the stands kept heckling. A friend said he thought it had been a bad call and the manager was justified in complaining. I said I didn’t care, I was having a breakthrough.
I was very publicly voicing my disagreement with a male authority figure, and I reveled in the feeling. It didn’t matter that he had no authority over me. It only mattered that I chose to let go, to be loud and disapproving and unrepressed and, yes, undignified. I wasn’t trying to persuade him, I was just feeling free.
I don’t need to yell at the umpire any more. Whether I have a good boss or a bad one, I can cope. But it's only in the last couple of days that connected all this with that unsuspecting man who came home when I was two and shifted my reality in a way I couldn't understand.

Posted by Nancy/BLissed-Out Grandma at 12:33 AM 19 comments: 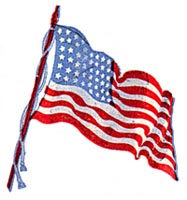 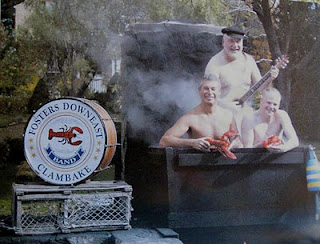 And now for something entirely different....
Rub-a-dub-dub, three men in a tub.. It's the last day of the month and time for the next image from the Men of York calendar produced by the Chamber of Commerce to raise funds for charities of York, Maine These gents represent Foster's Downeast Clambakes, and the tagline on their photo is "Hot Hot Hot...and steamy!" I won this calendar from Eva in a giveaway and have shared the photos each month; this is one of my favorites.
See you in June!
Posted by Nancy/BLissed-Out Grandma at 12:53 PM 19 comments: