Posted by Nancy/BLissed-Out Grandma at 12:57 AM 10 comments:

Labels: I won this calendar and I'm sharing the wealth 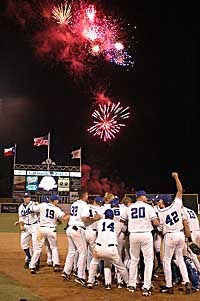 * "Terwilliger Bunts One" is a phrase from Annie Dillard's memoir An American Childhood, in which Annie's mother hears a play-by-play announcer exclaim those three words. She asks, "Is that even English?" For many years, the mother used the phrase as she tested a microphone or a typewriter or wanted a nonsense phrase for any purpose. Thanks to Google, we have learned that the story was included in an anthology and is used in teaching high school reading and writing classes.
Posted by Nancy/BLissed-Out Grandma at 12:34 AM 9 comments: