All due respect to Wheaties (for which the phrase "Breakfast of Champions" is trademarked), I don't consider them a healthy breakfast. I much prefer oat cereal. Peter cooks steel-cut oats three mornings a week when the kids are here, and we doctor it with plain yogurt, cinnamon, a little brown sugar, almonds, bananas, and/or blueberries.  Last summer at the lake, their mom cooked oatmeal every morning with applies and raisins, and she pre-cooked the brown sugar with a little butter. It was heavenly.

To my surprise, I discovered that dry cereals calling themselves Oat This and Oat That often have more wheat than oats. I just don't trust wheat anymore; it's been modified until it produces huge crops that aren't good for us. As I read somewhere (and I wish I could remember where because it helped clarify my thinking: It's not your grandmother's wheat anymore.When I want to grab a dry cereal, I've turned to plain Cheerios. Sometimes I experiment with a more exotic granola-type cereal; right now I'm eating something with flax seeds and quinoa.

But as you may have guessed, I'm really here to talk about a guilty pleasure.

In the 1970s, General Mills (who happen to make both Wheaties and Cheerios) opened a small chain of Betty Crocker Pie Shops. The first time I ate there, I fell in love with Peanut Butter-Banana Cream Pie. When I returned for it I learned they only made it occasionally, and the pie shop staff had no idea when it would appear again. I got into the habit of calling, and if it was on the menu I was there.

The chain didn't last long, and I never cared enough to try making peanut butter-banana cream pie on my own. But about 10 years ago I found myself with some Reese's Peanut Butter Cups on hand after Halloween. I took them to the office. On the same day, I happened to take a banana. The banana wasn't unusual because I never managed to eat breakfast at home.

On that magical day I got the bright idea of taking a bite of banana and then a bite of Peanut Butter Cup. Woohoo! Instant taste treat. And instant guilty pleasure. The candy is overloaded with sugar, coloring, preservatives, emulsifiers, who knows what. I will pay a price; fibromyalgia will bring pins and needles to life in my left hip and maybe keep me awake tonight. For one day a year, I don't care. 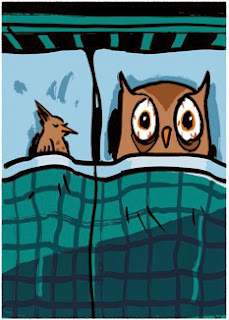 
I found the lark-and-owl illustration on a blog by Mitch Hinz, where he wrote about his own efforts to sleep better.
Posted by Nancy/BLissed-Out Grandma at 4:20 PM 15 comments: