Today we made our first visit to the Harriet Alexander Nature Center in Roseville, Minnesota, and it was a big hit. The interpretive center is set up to engage the interest and imagination of kids. Augie and Vi, as well as five or six others who came in, clearly felt right at home.


It helps that our kids already love nature. For example, Augie knew nearly every bird on display in the interpretive center. He pointed out the great blue heron, the horned owl, the raven. By this time three other families had come in. "Is he right?" someone asked. "I don't know; he's the expert," Peter said. "How did he learn all that?" "He read his bird book." In fact, he has memorized his bird book, and he was thrilled to see so many specimens that we haven't spotted in nature yet.

He saw what he thought was a Cooper's Hawk. A mom said, "I don't think the Cooper's Hawk is so mottled." Peter found a tag that identified it as a red-tailed hawk. Instant group learning experience.

Vi made herself right at home playing a game with another child and his grandma, and both kids loved the medical kit which included a working stethoscope. We tried on various antlers, identified different fur pelts (is it wrong to want a coyote coat?), made hoof and paw prints in a sandbox, admired the delicacy of a small snake skeleton, looked at books in the nature library, watched birds at the feeders just outside the windows, and saw bright blue bags hanging from maple trees to collect sap.

The people at the nature center offer programs for preschool-age kids, and I had thought about signing up for one or two. But everything was so inviting and we had so much fun that I think we'll just continue on our own.

We'll be back soon to explore the walking trails and revisit our new friends, including the prairie chicken and the red-tailed hawk.
Posted by Nancy/BLissed-Out Grandma at 11:22 PM 7 comments: 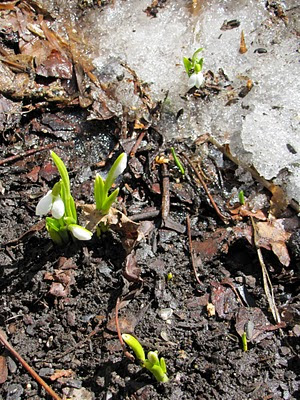 Last year I posted a photo of snowdrops on March 16. It's taken longer this year, but here they come. We especially admire the shoot that's pushing up right through some ice. The chives have started growing again, too. Makes me think spring really will come.
Posted by Nancy/BLissed-Out Grandma at 10:32 AM 11 comments: