New adventures are good, but a little exhausting. We're all adjusting. :-)

That’s the closing line of Abby’s post summing up Augie’s first week of kindergarten and Vi’s first week without Augie as her constant companion. Each of them faced up to new challenges bravely, showing some emotion but pulling themselves together to get the job done. For the grownups who accompany them on these journeys, it tugs at the heart. 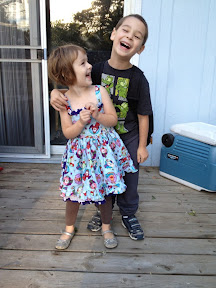 Augie faced serious butterflies before school Monday. He hadn’t slept much, couldn’t bring himself to eat, and was irritable and teary. Abby cuddled him, assuring him people do get nervous about big new things. He improved once he got dressed, but he wasn’t happy about posing for the obligatory first-day-of-school photo. When Abby said the pictures made him look dorky, she got a genuine laugh from both kids (and, I think, the world’s first non-dorky off-to-school photo).

At school, Augie held his mom’s hand for a long while and then said in a bright voice, “See you at the end of the day, Mom.” And when he bounded off the school bus eight hours later, he was grinning broadly and couldn’t wait to tell about his day.

At the end of the week, the teacher told Abby that Augie was doing great. “Today he read to me,” she said. He was reading book 8 of the Bone graphic novel series, so she got a good sense of both his ability and one of his great interests. His school, a St. Paul public school, is a Montessori-based magnet school, so we have high hopes for individualized experience.

At home after a full day of school, Augie is tired, and he indulges his need to be a kid without quite so many rules. But clearly he’s making the adjustment. 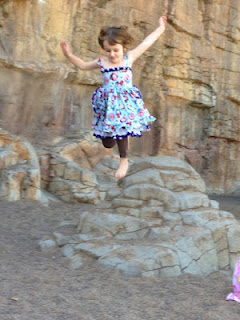 Meanwhile, ViMae is experiencing the biggest separation of her life. After delivering Augie to school Monday, she and her mom had a girls’ playdate. They made cookies and went to Vi’s favorite park, and while they had a nice time she said more than once that it would have been more fun with Augie there. (I love Abby's photo of Vi leaping at the park. This girl has spunk.)

Now that Augie is coming here before school, we make his needs the priority for that first hour. But after we get him off to school, every day is ViolaMae Day. We’ve taken her to breakfast and shopping at Michael’s, where she picked out a Disney Princess glitter-color kit (by the end of the day we both had glitter all over our faces). She and I went to the garden center and picked out mums for the yard and bulbs to be planted over the next few weeks. I just bought some sticker projects that I know she’ll love, and we have other Vi-centered activities planned. Once in a while she talks about Augie but like him, she’s trying to grow into her new role. 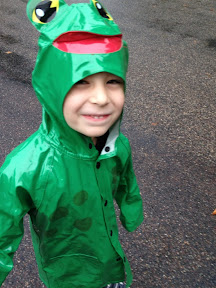 Still, we have witnessed their struggles. On Friday morning, Vi and I went along when Pa drove Augie to school, and we were all going in to see the layout. About 20 feet from the door, Augie suddenly froze. I thought maybe he was struggling with his heavy backpack, but when I looked closely at his face he seemed stunned. We kept asking questions, but as sometimes happens with his private thoughts, he ignored us. After 30 or 40 seconds, he simply moved on.  Peter and I think he was having a good time and then suddenly realized that while this was an outing for us, he wouldn’t be leaving when we did. He didn’t complain; he soldiered on. It fills my heart with pride, and pain. Change is hard. 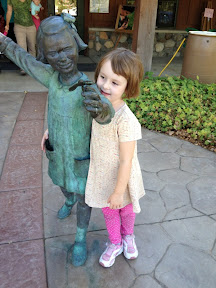 For ViMae, the sadness hit at preschool. Her dad took her Wednesday afternoon, and when he tried to leave she burst into tears because Augie wasn’t there…even though they were never in the same classroom. When we took her Friday, she didn’t cry, but she returned again and again for prolonged hugs, until a teacher came over and sweetly asked Vi to come read a book together. It was just the invitation she needed, and she never looked back. Abby reports that later in the day Vi was running with some boys that have moved from Augie’s old room to Vi’s. They were playing Star Wars. She will know at least as much Star Wars trivia as they do, and she’ll be able to make up battle scenarios. It’s a match made in…Alderaan.

And it’s all part of the great new adventure.


(I borrowed all the photos from Abby's family blog.)