The importance of blueberries 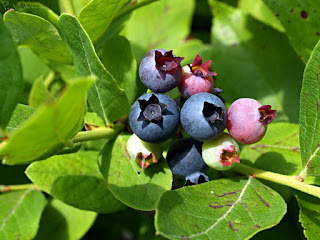 Yesterday the children and I were reading, for the hundredth time, Little Cottontail. It's the story of a bunny who wants to be all grown up, but his mother says he must first learn many lessons. Among them:  how to wash himself, how to find food winter and summer, and how to avoid being caught by a fox.

We have often talked about that fox. Ask what he would do if he catches Little Cottontail, and ViMae says, "Chomp." We talk about children learning to watch for cars, to be careful when climbing, to listen when grownups warn them that something is dangerous.

Augie suddenly buried his head against me and wailed something about rabbits eating his blueberries. I thought he was joking, but then I realized he was crying real tears. I finally got it out of him: "I don't want the bunnies to eat all my blueberries." And then he was sobbing again. 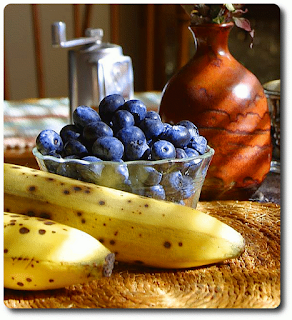 Here's the thing I didn't tell him. Blueberries are out of season, and they are getting very, very expensive. I still buy them because this boy loves them so, and because I have loved them ever since I was a child picking quarts of them alongside my family in the woods around our cabin. More recently I learned that blueberries are high in antioxidants, and they've even been called "brain food." That's an investment I'm willing to make.

In the summer when they are plentiful, we eat them by the handful with every meal. As they get more expensive we share a few with our oatmeal in the morning. But in the coldest months, when blueberries get to be $5 for a few ounces, I usually don't buy them.

Until now, that is. I may cut back on something else, but I'm pretty sure I'm going to be buying blueberries on a regular basis.