Indigo Wrath has tagged me and asked that I list seven historical or fictional characters I’d like to meet. I was a little surprised by my own lack of intellectual curiosity about historical figures until I realized that I've met a few powerful and influential people (some of them mentioned here) and have often been impressed by their ordinariness. Hence the saying, "Never meet your hero."

That said, I have assembled a mixed list of characters I wouldn't mind chatting with:

Sam Seaborn, a smart liberal political operative who worked for our nation’s greatest president—Josiah Bartlet, on the TV show West Wing. Sam often delivered the pithy progressive pronouncements that made the show such a liberals’ delight for most of its run. And he looks like this.

Fleur Pillager, a strong and fascinating Native American character in Louise Erdrich’s Four Souls who undergoes—and brings about—several dramatic transformations. I love Erdrich’s novels, especially those portraying generations of Native American families. The narrative flows, and occasionally builds to a wonderfully understated and ironic scene in which a dozen random details come together to create a magical event that results in (often hilarious) death or destruction and a lot of poetic justice.

Elizabeth Bennet, of Pride and Prejudice. My husband and daughter love, love, love her. I’m sure I will, too, when I finally get around to reading this book that they’ve each read a dozen times. 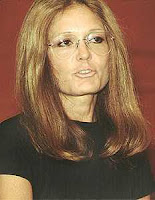 Wm. Shakespeare, to learn about his inspiration, his writing process, and just exactly who wrote what.

Mary Cassatt, to take painting lessons and let her know that women artists eventually get some respect.

Gloria Steinem, who managed to be both charming and eloquent as she helped communicate the need for, and goals of, the Women’s Movement. Oh wait, I did meet with her, for over an hour, in 1976. While some feminists were angry and strident, she was always interested in making positive connections—a very powerful role model.If we met now, I'd ask how she assesses where we've come. (She's still alive, but she helped change history and she's who I choose, so there!)

The inventor of Scottish bagpipes, to ask for volume control. I work at a college with a Scottish name, and the pipes are featured at many events. I've come to love them, from a distance.

Tag, you're it. If the question strikes your fancy, how about writing up your own list of seven historic or fictional characters you'd like to meet? I'd be interested to know!
Posted by Nancy/BLissed-Out Grandma at 7:00 AM 16 comments: