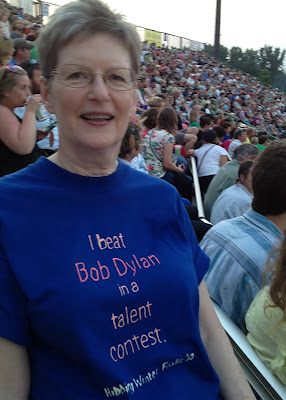 ...in a talent contest. And I bragged about it.

Peter and I attended the Dylan concert at Midway Stadium in St. Paul Wednesday night, and as I have done twice before, I proclaimed my achievement on my shirt for anybody to see. (I've also told the story here.)

Some people who see the shirt think it's a joke at Bob's expense. Peter likes to say, "You'd still beat him in a talent contest," not because he doesn't like Dylan but because he knows many others don't.

But those who really do, and who decide I might be telling the truth? Those people are all over me. They ask me to tell them the story, and then they ask how well I knew Bob (I knew his mom and brother well but not Bob). Often they ask me to pose with them while someone takes a picture of us. I find this amusing, and I oblige.

Some of those people had Dylan connections of their own. A doctor told me he once stopped Bob on the street in New Orleans and they carried on a pleasant conversation. (The doctor's daughter backtracked, saying Bob was more surprised than gracious.) Another man told me he was friends with the English teacher who figures in some stories about Bob, with whom I also was a friend.  A musician spoke with me at length and then came back to ask whether I realized that Bob was playing keyboards as part of the concert - significant since both Bob and I had played the piano in the talent contest in question.

I came to realize that by striking up a conversation with me, each of these Dylan fans got to tell his own story, which made the concert a more personal experience for them. And, of course, for me.

When my dad was still alive and living in Hibbing, just across the street from the house where Bob grew up, I'd run into uber-fans who had made the pilgrimage to Bob's hometown. There are self-directed tours that tell people where he lived, where he went to school, and where to find displays of photos and other memorabilia (the library and a restaurant called Zimmy's). I was sitting on my dad's front steps one Sunday morning when a father and grown son drove up and began taking pictures of the house across the street. Eventually, as so many Hibbing residents do, I struck up a conversation. They only had a few hours, the library was closed, and they hadn't spoken to anyone else. They got to ask me a few questions, and they got to tell me of their devotion to the songwriter who has been called the poet of his time. They were excited and grateful...and they took each other's picture with me.

Just before going to last week's concert, I had posted about self-identity. I was wondering what I would tell people about myself now that life was changing. For one evening it was this:

"I beat Bob Dylan in a talent contest. Yes, really."

And as a result, I met some interesting folks and had a great time.
Posted by Nancy/BLissed-Out Grandma at 6:44 PM 16 comments: