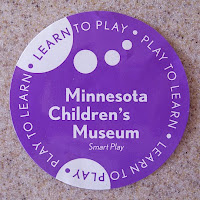 It's a great place to go, everybody gets a good workout, and the two nannies now have a better idea of how to keep tabs on the kids, and where you can let them run while you station yourself at the lone exit. It's all about strategy. Besides, it's not like anybody has ever lost a kid there permanently. I'm sure we would have heard about it.
Posted by Nancy/BLissed-Out Grandma at 6:17 PM 3 comments: