I’d like to blame it all on Mary. She’s the wise and gracious blogger who signs herself “Grandmother” at Journeys into Elderhood. A couple of weeks ago she wrote here about a surprising discovery: Never a computer gamer, she now found herself spending hours on something called Dragonvale. 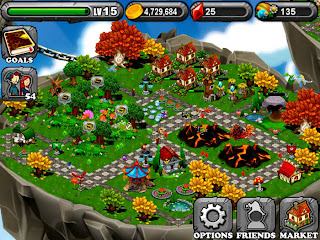 Mary was surprised that a computer game could absorb so much time and attention. I, on the other hand, am familiar with falling down a rabbit-hole, being bedazzled by eye candy and strategically placed sound effects, loving the challenge of solving new kinds of puzzles, and feeling driven to master them. Eventually I emerge and wonder where time has gone. I blame only myself. But I'm not really complaining. It's fun, and a person could have worse pastimes, right?

Mary plays Dragonvale as a way to connect with her grandson, who lives halfway around the world. I decided to introduce it to Augie and Vi. They’re a little young for it, but they love zoos and they often play at being zookeepers and building habitats with their Legos. Dragonvale is an iPad version of a big dragon zoo, or theme park.

We agreed to make decisions together as we lay out habitats, populate them with different types of dragons, and add amenities for visitors. It didn't take long for the kids to get into the game. They love buying new features, deciding where to place a restaurant or a flower bed, deciding whether to upgrade our stone path to brick. Equally fun is curating the dragon collection, choosing which fanciful types to feature. 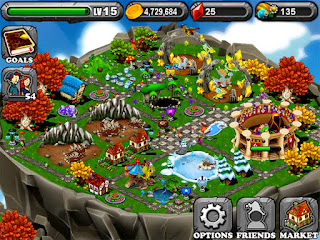 A player can purchase "eggs" for real money, but we aren't doing that. Instead, we use "breeding caves," choosing dragon types that seem likely to produce the hybrid we seek. The process often takes a day or two in real time. We are learning patience.

To offset the built-in waits, the game provides timely visual rewards--symbolic little starbursts for example, when we collect money or harvest the food we have learned to plant continuously. And we love the tiny princesses and wizards who hurry this way and that along our paths, not to mention the imaginative dragons.


By agreement, I always do a few things to move the game forward when the kids aren't here. We don't open the iPad until 11 a.m., and they never push to see it earlier, but each morning Augie asks, "What's new, Grandma? Any new dragon babies, or eggs? Any complications?"

Wait until they find out on Monday that we just qualified for a third island, which will provide space for many new kinds of dragons. And that I bought the Colosseum so we can earn gems. And maybe, if all goes well, that I will have bred a Bloom Dragon before it becomes unavailable on Monday (it's seasonal and very hard to breed).


None of this makes sense to you (except to Mary). But I'm writing about it because it has captured my imagination and soaked up my time, and that's why my last post was, um, a long time ago. Oh yes, and because the kids love it.

Augie decided Friday that when he's 8, he will have his own iPad and we'll each play our own game and then compare notes. Which, in fact, is exactly what Mary and her grandson are doing. Sounds like a plan.