Plie, jazz square, and rond-de-jambe:
Dancing Together, Part One

This is a story about two five-year-old ballerinas...separated by 65 years and united by a season of enjoying dance together.

Last October Abby asked whether I'd be willing to drive Vi to dance class on Tuesday mornings. The alternative was an evening or weekend class so Mom or Dad could take her. Thinking only about winter driving, I said I'd consider it. Then it hit me--"What am I thinking? Of course I'll take her!"

I fondly remembered taking ballet and tap at five and six; our town's only teacher moved away after that. All my adult life I've been an avid ballet-goer, and Peter and I had taken both grandkids to several free lunch-hour St. Paul City Ballet programs. Vi had talked about dance lessons since she was two, and at four her mom figured she was ready for Dancercize Kids. At the very least, I knew this would be fun. In fact, it became a major part of our special bonding this past year and it was memorable in many ways.

Girls' morning out. Once a week I wriggled her into pink tights and tutu with warm clothes over the top, grabbed the pink ballet bag with tap and ballet shoes, buckled her into a new pink car seat, and hurried off to the dance studio. I watched her lesson on a video monitor and chatted with what I came to refer to as the "other mothers." On the way home Vi and I often stopped at Subway to pick up meatball subs to share with Pa for lunch; she loved holding the warm sandwiches on her lap on cold winter days.

Vi making friends. Walking into the studio the first day, Vi was very quiet. Four girls who'd begun class together a couple of weeks earlier were running up and down a hallway, squealing and burning off pre-class energy. Nobody seemed to mind. Vi looked at me tentatively. I nodded, and in a flash they were all laughing together. A minute later the teacher called them into class. Vi told me later that she didn't feel like a "new girl" in class because they had already become friends while they ran together. Somewhere in there is a lesson for grownups, I think.

By the end of May, the "other mothers" commented on how engaged and outgoing Vi had become. When all the classes came together for rehearsals and recital, she was often at the center of a buzzing cluster of little girls in different costumes, awaiting their turns to perform.

Vi's growing confidence. "Watch the teacher, try your best, and have fun." The teacher's rules for this age group are designed to make dance fun, not work. Vi paid very close attention, imitated the teacher's moves well, and felt very good about it. Soon she told me she was the best dancer in class.

Instantly, my long-dead mother's voice prompted me to say--as I was taught--that it is impolite to brag. The lesson I had internalized, of course, is that it's unacceptable to believe you excel at something.

I'm happy to say I didn't tell her that.

I loved her emerging confidence and self-esteem, and I could see that dance was contributing. Emphasizing achievement over competition, I told her sincerely that she is especially graceful, that she was learning everything very well, and that she could become a wonderful ballerina.

She corrected me: "I am a ballerina."  I decided she was right. Life can't always be about preparing to be something. If one is dancing ballet, it's fair to say one is a ballerina.

"Practice, practice, practice." In January, after nearly a 65-year gap, I restarted tap lessons. I practiced several times a week, and since we were learning some of the same steps, Vi and I practiced those together a few times. One thing led to another.

I noticed that in class she had trouble with the jazz square, a complicated four-step maneuver with a crossover. It was a recurring move in one of her recital dances, and all the girls struggled with it, which messed up the rest of their routine. The teacher, believing the girls would pick it up by watching her, didn't stop to explain it. But she had recently taught it to me in tap class, so I taught it to Vi, who learned it in two minutes flat. She seemed happy to have mastered it.

Several moms recorded the recital dances during class so they could help their daughters memorize the steps. I did the same. We reviewed each musical phrase, practicing the set of four steps and then moving on to the next. I could tell that Vi was grasping each bit, and her movements became more focused and deliberate. I thought, "This is great; she's learning the value of practice." Ha!

She told her mom the other day that in the weeks before recital I'd made her practice her dances every day, and it was boring. I probably did suggest it every day, but we only practiced when Vi agreed, which was once or twice a week, and usually just one of the three dances. Vi has an excellent memory, and when she began telling me she already knew her dances, she probably did.

Bottom line, I like to practice. It helps me improve my steps, memorize the dance, and build stamina. And it's fun. Vi is not a fan. On the other hand, when she was standing in line with Peter the other day, she kept moving her feet in a pattern. He asked what she was doing. Her response: "Practicing my jazz square."

Learning the lingo. Even as a ballet fan, I rarely bothered to learn the French terms for each movement. When Vi demonstrated her plie and releve, I flashed back to the days when I was so pleased to perform those moves for my mom. Then came the rond-de-jambe, which I had mislearned as "rhondajon" but had practiced often at the barre. Soon Vi was showing off her excellent tendu along with port de bras, passe, chaine turn, and other favorites. Some of these terms were new to me, but they are all part of a language by which Vi will always find ballet approachable.

Becoming an insider. Once you begin to learn a specialized language, you begin to feel like you belong. Peter and I saw that with Vi when we took her to the May lunch-hour presentation by St. Paul City Ballet. This time, the company's high-school-age students demonstrated barre exercises on which they were about to take exams. While their tendus were more complicated than hers, she recognized and identified with them. And when invited to come up front and join the dancers, she did so--for the first time in two years.

Girly stuff. When the recital costume arrived in April, I got to be the one to help Vi try it on. We experimented with hairdos, looking for a way to anchor the floppy headpiece and keep her growing-out bangs out of her eyes. Her hair continued to grow, and in the end all we did was pull the front into a swept-up pony tail. With a dusting of blush and eye shadow and a dash of lip gloss, her features didn't wash out in the spotlights, her natural beauty showed through, and she felt like a movie star. 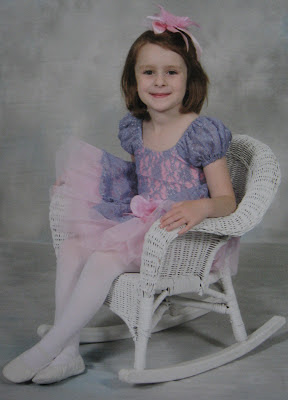 The true test. As recital week approached, things got intense (we had another dance commitment, a parent-child production number, which I'll tell you about in another post). Sunday was Vi's first birthday party with friends and Monday was her last day of preschool, both big days. Later Monday was dress rehearsal on a big stage in a theater that had, she said, "more seats than I've ever seen." She didn't seem nervous, but I decided to make sure neither of us got overwrought.

I stopped asking her to practice, and instead we spent much of the week nestled together on the couch. We brushed each others' hair, told stories, enjoyed being gentle and quiet together. We both felt calm as our Friday and Saturday performances approached.

She was a champ. She enjoyed performing, had fun with the other girls in the waiting room, and never complained, even when my own mistake forced us to rush to get ready (more about that in the post about our joint dance venture). I was a backstage volunteer, and she never minded when I was paying attention to other little girls or even disappearing for a while to walk a group down the stairs to the backstage area. She soaked in the praise of her parents and grandparents, including Nana Ellyn and Papa Kenny, and she didn't even notice that her brother seemed bored. It helped that he'd handed her a red rose after the show.

As we drove home Saturday, our two-day marathon over, she gloried in the medallion the school had given her for completing a year of dance. She was sure it was a gold medal and that some of the others only got silver or bronze. She'd also learned that if you dance four years they start giving you trophies instead of medals, so she intended to dance four or five years. I loved her enthusiasm, and even her competitive spirit. She'd had a good dance experience from beginning to end, she'd grown as a result, and she wanted more.

This past Tuesday we went to her final Dancercize Kids class, a post-recital party. "Next year you're taking me to the Tap, Jazz, and Ballet class," she said. I did not say I'd think about it. I said, "Okay!"