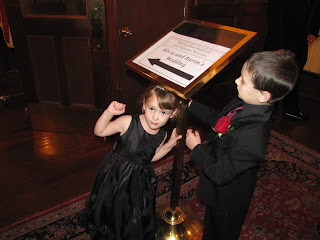 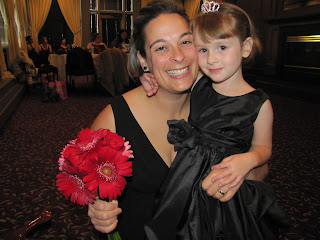 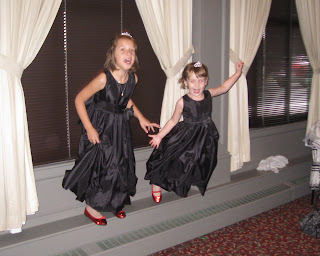 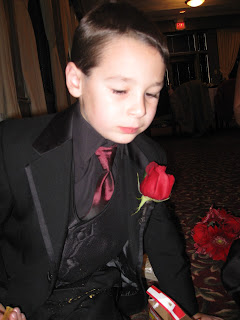 Posted by Nancy/BLissed-Out Grandma at 5:47 PM

ViMae looks so pretty ! I bet she loved that tiara! Augie is very handsome! It looks like the little girls had lots of fun..love those red shoes:)

They all look so lovely. I love the black dresses and little suit. Weddings are always so much fun.

While I agree the children look gorgeous, I really don't understand this modern preference for black dresses at weddings. Guess it's just my age, but I find it hard to see black as a happy colour. Having said that, I have to admit I wore black at my daughter's wedding. But she chose the dress and shoes, and while I loved the dress (still do - and at least it has come in useful since the wedding), I did insist on adding a red velvet jacket and multicoloured silk shawl. Never mind, you littlies are beautiful.

Fun to see them all dressed up but you're right; they grow up much too quickly.

More than adorable: they did realize the gravity of the situation, even while they were all dressed up. Love your pictures. What fine looking children they are, Nancy. :-)

Those two kids are every parent's and grandparents dream. I'm sure that their wonderful manners are in good part due to your loving presence in their lives!

What a magical day!

Seeing who these adorable children are - today and in the future. You've captured all the parts of this day so beautifully - I think they see themselves as being part of the bigness of this event, and how special is that!

How grown up they look! I especially love the tiara.

Funny how, just once in a while, you get a glimpse of who they'll someday be.

Everyone looks wonderful in black!