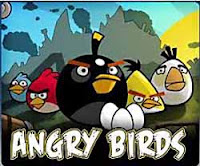 It occurs to me that this lesson might have come in handy while I was working. Loosen the rules and make new discoveries. Find a way to get the job done but still enjoy the process. Construct projects in such a way that the whole team wins through cooperation. With any luck, Augie and Vi can use these ideas in their own lifetimes, and well before they become grandparents!
Posted by Nancy/BLissed-Out Grandma at 4:37 PM

I just read a few posts. You have wonderful grandchildren. And they're really fortunate to have you taking care of them. I really think smalls should be with someone who loves them if they can't be with their parents.

I'm in that phase where the kids have grown up (mostly...25 and 19 in June) and haven't gotten married or reproduced.

So I'm looking forward to grandchildren, but I get my kid fix M-F running a before/after school program in a local elementary school.

I haven't play many board games since Monopoly many years ago... these all sound like fun and a lot different than what I knew back then. :-)

Can I come over to your house to play? You guys have all the fun!

I like this attitude toward playing games with kids. If they are having fun they are in a much better place to learn whatever the game has to offer.

Valuable and wise advice! And from daughter to mother, as well! Good post, enjoyed it very much...

"Loosen the rules and make new discoveries." What a concept! I'm learning that now myself.

Sounds like a perfect strategy to me ..enjoy the moment! :)

Richard Scarry's "Please and Thank You" book helped me raise two boys many years apart. I had no idea there was a game. Sounds fun. Both of my sons loved playing board games, as did I while growing up. They were a constant in my life. I've never looked into online games. I fear it could be addictive. :0

Coloring Outside the Lines said...

I am truly amazed at how quickly my grands (even the youngest one) learn how to play the computer games. Good advice on letting them learn at their pace.

my family was a lot like yours---absolutely cutthroat when it came to games, and no allowances made for age or ability. even if you were just leaning, even if it was the "practice" round for you to get the gist of the game, they were still cutthroat.

and you know what? playing games with my family is not all that fun.

What good realizations! I'm still back at wanting to win!

Hi Nancy! There's Wisdom here; I'm generally poor at having fun with others, and need to find a better way. Thanks for the nudge. Indigo x

Sounds like the kids could teach us a thing or two!

Amazing what we still have to learn, isn't it? Such a patient post. I would imagine you a most patient grandmother as well. I'll have to remember that in my own learning.

Jackson, my adorable grandson, is such a kind, gentle, spirit and then, one day I saw him on a basketball court. Way, way, wayyyy to competitive. Arguing with the coach, critical of his teammates. "Nanny" had some serious work to do! Basketball season ended calmly, baseball is a breeze. enjoyed your post (as always) you are soooo patient!

Never too late to learn, is it? Yes, if only we could bring the lessons of our later life into the past! But at least you know it!