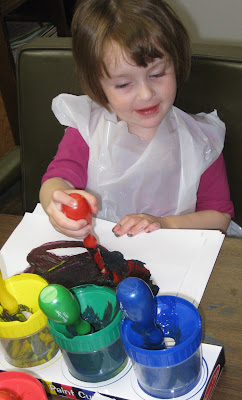 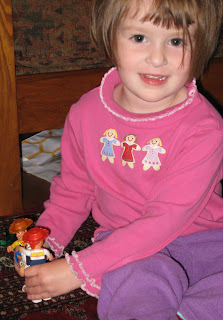 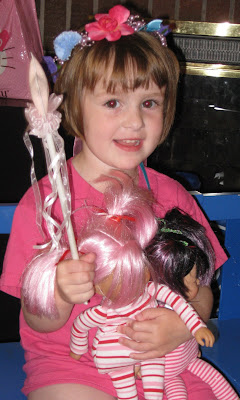 I was saying that (about both kids) to my sister's husband yesterday, and he said, "Yes, and the year after that they'll be graduating from college." All I could think was, "I hope I'm around for a good long time yet, because there's so much for us to do together." I love you Viola Mae. Happy Birthday, Princess.
Posted by Nancy/BLissed-Out Grandma at 6:06 PM

"we may have acquired the last diaper we'll ever use in this house...until we need them ourselves."

I hope for many, many years for you and Viola Mae.

Yeah, I love that line, too. ViMae is a real sweetie. I'm certain you'll have many years to enjoy each others company. I love that Augie has a doll named Bob... And I can relate to the line from your sister's husband. Time seems to go swiftly. It sounds like you'll enjoy every minute.

What a wonderful time you're having with the grands, and she is definitely more than adorable. It's so true that they grow up incredibly fast while you're not looking... :-)

I have just recently thought that it seems like my grandkids are growing up even faster than my own kids did.
Happy birthday to your precious little princess.

Viola Mae is just precious. I envy you for being able to spend all of that time with your grandchildren. They are so fortunate to have you, Blissed-out Grandma, in their lives. You are giving them experiences and memories that they will build on for a lifetime. This how life should be. Enjoy the time with them because it will fly by faster than when you had your own children.

What a lovely relationship you have with your granddaughter!

I hope she has a happy birthday.

You are so lucky to be a daily presence in your grandchildren's lives. I'm looking forward to visiting mine in a few weeks and we will do many of the same things. My girls, 3 and 5, both enjoy doing "projects" with nana. I always pack craft projects in my suitcase.

Happy Birthday Beautiful ViMae..three..and she is a big girl now!! She gets to do more big girl stuff with you, I know I enjoyed this time of discovery with my grands when they were at this age. Give me a two or three year old any day..versus a teenager!
Aubrey next door was three last month, I got her a tutu and a princess tiara and some rings..her Grandma bought her some heels..oh she had the best time getting dressed up!
Enjoy you time with her..they grow up so fast:)

She's a little doll! Wishing her a Happy Birthday! You are such a wonderful Grandma!

Happy Birthday, Vi!! I'm a couple of days late but as any proper princess will tell you, it's perfectly acceptable to make your birthday last ALL month long! Let's not put them in college just yet...I think we may have just a few more tea parties to attend.

How wonderful that you have each other. She's a beauty for sure!