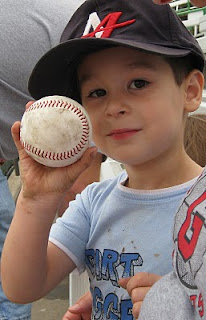 Yesterday (August 17) was the one-year anniversary of my blog. My first post was photos of the grandkids at a Saints game. To celebrate, here are some new pix of the kids at the ballpark.

Augie has made friends with the umpires, and the crew chief recently invited him to join the umpire crew as they rubbed mud on the balls before the game. (Yes, the balls come shiny in the box and have to be rubbed with special mud to take the shine off.) He has no idea what an honor that is, or how unusual it is for umpires to emerge onto the field, turn to the stands, and call, "Hi, Augie!" Not only that, they gave him an official American Association umpire's cap. 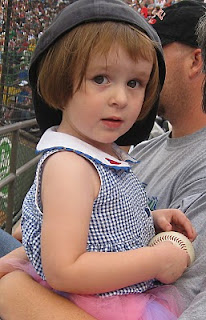 On the same evening, ViMae was invited to carry balls out to the umpire. One of the Saints' traditions is that each year a new trained pig totes balls to the umpire. On occasion a fan gets to do the job; Augie's done it a few times. ViMae was wearing her new tutu (which I had just made) and the pig wore his tutu, and they were both very cute. (I'll post a better shot of the tutu another day.) 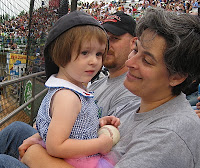 Posted by Nancy/BLissed-Out Grandma at 1:06 AM

Happy Blogiversary! Where's the shot of the tutued pig with the tutued ViMae? THAT'S the one I want to see.

How fun for the kids. Hometown baseball is the best.
Happy Blogiversary.

And what a wonderful blog you have, my dear! It's only been a year since your kind and wonderful spirit came to Blogaritaville? Happy Blogiversary! And Augie is definitely a special boy. Hugs.

Well happy Blogaversary, hope you have many many more, I missed my year anniversary, and sad I did, but perhaps I can do something special for my 2nd year, hugs and have a great day, Barbara

Seriously, you couldn't have cropped those pictures?!?!?!?!?!

Happy Blogiversary! I love the photos of your little ones. That tutu is darling!

Can't wait to see the stories and photos to come in your SECOND bloggy year!

@Abby...Seriously, you are TOO CUTE to crop out of the pictures.

Great photos! It is good to see Abby with the kids! Conrats on your blogiversary..I hope you keep on writing for many more years..I love following your adventures with your grands:)

Congrats on your blogiversary! Love the cute kid pics, as always!

Congratulations! I look forward to the two pink tu tu's photo and another year of sharing our stories.

Congratulations on your 1st yr! Love the grandkids photos and the tu tu is too much! Reminds me of my granddaughter who does similar things!

Congratulations on One Year!!!

We have a very good Division II baseball program here at Alluvial Flood Plain State University... it's one of the few programs that allow the foul balls to be kept... I always seem to end up with quite a few of them. I enjoy giving them to the little kids that one can find around the ball parks...

I have never been to a Saints game but those who have tell me it's great fun. I would have loved to see little Vi in her tutu with the Saint's pig. Looking forward to pictures of that!

Wonderful photographs, and well done on one hundred posts. Here's to one hundred more! :)

Such adorable kids! And BIG congrats on your first year. May there be many more!

Well, happy blogiversary! I hadn't realized that we began our blogs just nine days apart. Perhaps between that, second marriages, and wonderful grandchildren, we should get together more often! ;^)

happy Blogiversary (o:
the game looks like a great way to celebrate

Hooray for your Blogiversary! Many happy returns of the day!

Happy Anniversary!! Love the cute pictures of the grands!!

wow......a year rolls by very, very quickly. congratulations on sticking with it! and for allowing us to peak inside your world. WHAT a treat!

Happy 1 year in this great world of blogging! Here's to many more. And those photos? Delightful as always.

Happy Blogiversary!! I know that it has been a fun-filled year, complete with adorable photos, funny stories, and some flashbacks to the good ole days. And when we were on a tour of the Baltimore Orioles stadium last year, they told us that there is a river...somewhere...where they have the mud harvested specifically for roughing up game balls in professional baseball. Apparently, it's used for that purpose only and the people who own the business of dredging the mud make a LOT of money at it. Who knew such businesses exist??

I wish I hadn't been away for your blogaversary, but accept my belated congratulations. I remember my first -- It felt astounding that I still had anything to say! I hope your continues a very long time!