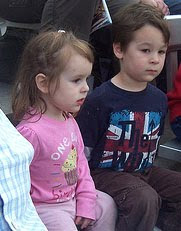 P.S. I was going to write a special post about reaching the 100-post milestone, but it actually gave me a case of writer's block. So I'm noting it, but really, who needs a special post to say I love writing, reading, commenting, and responding to comments? You know I do!
Posted by Nancy/BLissed-Out Grandma at 7:10 PM

Oh, you put a giant smile on my face, and I don't think even the evening news will be able to wipe it off!

We love our Cardinals here, and my kids are still huge baseball fans! Now my 3-year old grandson is learning to watch a little, too, though he's way out in Sacramento.

I was enthralled with your description of the boys behind you. I love the fact that they were respectful and open. How cool is that?

I love that you gave them baseballs, and that they were appreciative.

My son is a particular aficionado of minor-league baseball, and over the years he and I did some car trips just to see some of those teams play. It was always a good time. Always. And boy, do we have memories! That little boy is almost 29 now, and getting married next Sunday. He wanted, in lieu of a rehearsal dinner, to take their out-of-town guests to a baseball game. It's not turned out that way, mostly because of the logistics, but you see I raised him right!

Beautiful......gives me some hope for the human race.

Congrats on post #100! Sounds like you had a fantastic weekend. This weather couldn't be better, and there's nothing more fun than seeing kids happy!

So nice to know that there are people raising nice children.

Congratulations on Post #100. And of course everyone knows what tailgating is, how long has it been a verb? Good post!

I really loved this post. I also have a baseball loving family. My son-in-law is a former professional player, many years in triple A, but made it to "The Show" for a while before he retired. All 3 of my grandsons, 9, 6 and 4 are big baseball fans. I hope they retain the spirit of the boys you wrote about.

Such a wonderful story. you've brightened my evening. :)

Love the 3 generation memories. We too enjoy our 3rd generation sport but it's not baseball...it's racing.

My hubby's dad and his friend had a stock car. When they passed,(they both died the same month and just days apart)his friend sons gave us apicture of that car.

When my hubby and I started dated, each weekend his family went off to the races. For my hubby's brother it was drag racing. Either I went or I was left behind.

My boys never really got into the racing but our daughter did. Not behind a car but in the stands. Now we take her son and daughter to the races and they love it.

Thanks for the memories.

After rereading my comment I realized we are really on the 4th generation of racing. Senior moment!

I enjoyed your post! It's so important to pass on our passions to the next and next generation. Expose them to lots and see what they love.

How wonderful that you connected on the baseball level to all different ages..especially the young men sitting behind you...I bet they are still talking about the game!
Congrats on your 100th post! :)

Happy milestone! That is cool! I'm not a super big sports fan but this sounds like a wonderful experience. One that I'm sure will be a "forever" memory for all of you!

It is time to introduce J to baseball!! Sorry my Dad isn't around to see it... he was the biggest fan of all!

What lovely thoughts. This post really made me smile. It's nice to know there are people like this
Mary

Great post
we never go to the Rockies games
well hardly ever
I loved watching my boys play baseball
and nieces fast pitch
I like to have people I know playing
I have an 11 year old Great Nephew that is pitching so we go see him once in awhile
so glad you gave the boys a baseball (o:

I think this is a much better post than the 100th. Baseball - been so much of a part of our lives the past 25 years. I love our description of the park. What fun.

No wonder they call baseball the American passtime. I really enjoyed hearing about your lovely summer evening at the Saints game.
May you have hundreds more!

This was a perfect 100th post capturing the spirit of your you-ness to a T.

Loved your post. We have four boys in the family and some of my fondest memories are listening to their conversations. The banter, the camaraderie, the enthusiasm, the honesty, the jokes, the hilarious put downs, their joy of being together.

You brought it all back. Thanks.