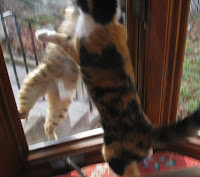 Ever seen anything like this?
Posted by Nancy/BLissed-Out Grandma at 7:09 PM

Whoa! That is one weird, hateful cat. It makes you wonder...

He's like the dumb bird on the windex commercial!
You're gonna have to smudge up Mali's side of the door. Then, at least, you wouldn't have to witness the maniac behavior.

It also sounds like something one of my cats would do.

Now that is truly annoying! How about pasting up on your window a huge snarling german sheperd face for awhile. LOL

Thank you for stopping by my blog. I am so happy you enjoyed my photography. :)

Hey, Nice to meet you..thanks for the comments over on my blog!
You have a great blog here!
That sounds like one weird cat. Water usually discourages them..:)

That would make me so mad!! I would go talk to your neighbors!!