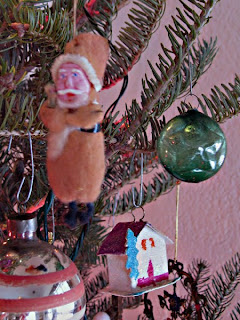 Several of our ornaments are really old, including the foursome seen here. The Father Christmas figure was on Peter's great-grandmother's tree back at the turn of the century (1900, not 2000). He found an identical one in an old farmhouse he was cleaning out years ago, so we have two of them. The little house was on his parents' tree, as were the two glass ornaments. My parents had many of the striped orbs, too, so the few we have are meaningful to me as well. 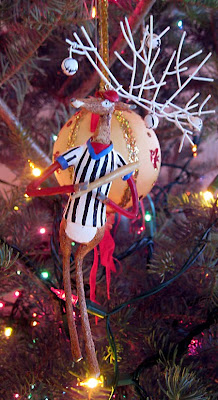 The elaborately antlered reindeer in baseball togs is a new acquisition in honor of Blitzen and of our great passion for minor-league baseball (specifically, the St. Paul Saints). Behind this guy is a satin-trimmed styrofoam ornament I made when I was about 13. My mom got the idea (and the pattern for the six satin segments) from Good Housekeeping, which she and I studied every year for new decorations and recipes. Several of my siblings made ornaments; I have three that I made, and I'm still very fond of them.
Posted by Nancy/BLissed-Out Grandma at 7:46 PM

Labels: christmas, grownup stuff, photos, so many stores and so little time

Adorable ornaments. And Blitzen is a hoot.

I love all of the history behind so many of your ornaments---SO special!

You are so lucky to have those ornaments.. I am going to try to get my courage up and ask my ex step-mother what ever happened to my moms. She either still has them or they are long gone.

@Gayle: Before she died, my mom divided up family photos, ornaments, fancy dishes, etc. We said, "Doesn't Dad want some of those?" And she said, "You know he'll marry some blonde floozy; you don't want her to have all this stuff, do you?" Turned out to be a gray-haired floozy. But still. Seems like you should ask. Even if you don't get them back, you'll know that you tried.

I do love the old ornaments! Thanks for sharing yours:)