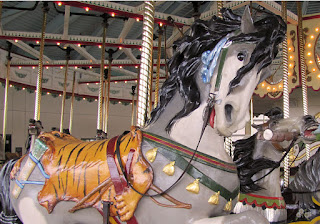 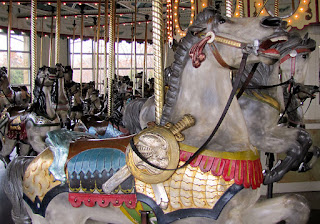 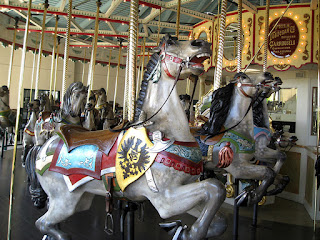 Posted by Nancy/BLissed-Out Grandma at 5:11 PM

You and your husband are to be commended for a job well done - one that has brought much joy to many people over the years. You did the right thing. I am confident that a proper solution will be found for your beloved project!

You are bold to step aside and are leaving plenty of time for others to step up. This is a job well done. The horses look like they belong to Crusader knights with the shields and swords and are beauties.

I clicked on your link to the carousel site and looked at the photos of all the horses. I see some can be adopted.

Does this mean that now I will see your presence more often in the blogosphere? I've missed you, Nancy! Congratulations on a job well done and knowing when it's time to quit. :-)

I hope that others step forward to manage this worthwhile project.

You did great things to save the carousel...really great!! Time to hand it over is bittersweet...but it is the right decision. I can only imagine going through all that paperwork and what memories it brought back! Hope you are having a good summer:)

You have both done a wonderful job and I know it is very difficult to step back and hope that others will fill your shoes. Scary, too but you just have to let it happen. Good luck in your new adventure!

I'm so glad you are getting a rest but it is terribly difficult to leave a project you loved and for which you worked so hard in new hands, no matter how well intended. But I know you did all the right things in the planning and preparation. I hope you find many wonderful things to enjoy in your next phase -- I have a feeling you won't be bored!

This was a fascinating project so I'm curious as to the next.

That being said, letting go is very hard. For with your hearts and souls entangled in this project passing it on to others has to be most difficult. Seems you are past that and on your way. So, spill it as to the next project. You're coming to clean out my attic. Right?