Will the real Mother Nature please stand up? 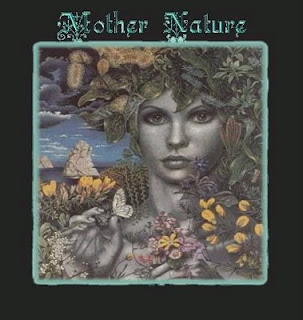 When you Google "Mother Nature images" you find things like this--bountiful, rounded women wrapped in flowers and creatures, looking sexy (procreation and all that). When I look out my window I'm tempted to think of her that way, given the proliferation of flowers and winged things just now. But nature can be harsh. Roaming neighbor cats kill songbirds. Bees are disappearing for reasons we don't even understand, and their absence will play havoc with our food supply. Oil set loose in the ocean is killing birds and fish that we can see, and thousands of lifeforms we don't see, all of them part of nature's interdependent system. 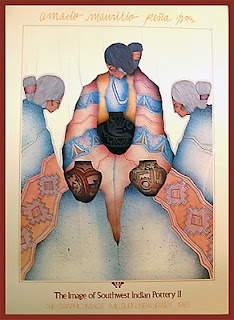 I've had this poster by Amado Maurilio Pena Jr.for 25 years. I bought it because I love Southwest Indian pottery (and, I admit, because the colors matched our bathroom decor at the time). I came to see these women as Pena's version of Mother Nature. The black earthen pot is taking on life in utero; a birth canal opens beneath it. The women's faces are lined, and they turn away. Their angular figures resemble the topography of the desert Southwest. In this view, nature appears dry and harsh...because it is.

Children's stories are full of the give and take of nature. Suki, the Saggy-Baggy Elephant, escapes a tiger and a crocodile, and a herd of adult elephants rescues him from a lion. Augie was only two when he fell in love with that story. His mommy cringed, hating for him to know that dangers lurk. But he insisted on reading it. So every day we talked about Mommy and Daddy and grandparents being the "big elephants" who are there to protect Augie and Vi.

Little Cottontail's mother teaches him to evade the fox. But Henny Penny and her foolish, unthinking friends are outwitted, and eaten, by Foxy Loxy. We talk about it with Augie and Vi, but not in detail. Death is not yet in their vocabulary. A month or two ago, we took them to see tiny baby birds in a nest. A few days later the birds were gone. Too young to have fledged; they were probably grabbed up by a crow.The kids never asked and we never mentioned it.

Instead, I began showing them an eagle cam. An eaglet called Phoenix was growing up on camera on Hornby Island in British Columbia. We were charmed by the tiny white fuzzball, and the kids were mildly interested in new feathers and rapid growth. In truth, I was the one who became fascinated, checking in every day to watch Phoenix learn to feed herself and begin to stretch ever-longer wings. Reading comments of the chatroom regulars, I learned more about eagles than I'd ever known, and I started to take a certain pride in the spunky eaglet who seemed ready to fly any day.

On Wednesday evening, Phoenix died in the nest. She was seen having trouble breathing, and rescuers with special equipment were on the way but she died before they could reach her. Instead, they brought Phoenix's body down from the nest and flew it to Vancouver, where tests are being done to determine cause of death. Thousands of people around the world had watched Phoenix, and there is great sadness, as you may imagine. To honor Phoenix, people are leaving Facebook tributes, sending contributions to the organization that helped in the rescue-recovery effort and volunteering with avian rescue around the world.

Watching Phoenix was somewhere in the continuum between bountiful Nature and harsh Nature. It was fun, enriching, satisfying, but realities came into view...locals talked about the diminished fish population, noise pollution, other dangers to wildlife. Phoenix's sibling egg never hatched. One of the two eaglets born last year had died in a freak accident (it was caught in Mom's tailfeathers and fell when she left the nest).

It is certain that every living thing will die. Most species survive at the expense of other species, keeping things in balance. And Nature is served when the less fit do not breed...hence the expression "survival of the fittest." When humans, with amazing hubris, poison and pollute and otherwise interfere, Nature produces consequences that we didn't predict and often don't like. We are diminished, whether we know it or not.

We don't yet know what killed the 11-week-old Phoenix. The vet has reported that outwardly, her body was thin but otherwise perfect (and that she probably was female). We speculate...did she eat something poisoned? Were there internal problems? Whatever the reason, I'm sad. Nature is bountiful, and harsh.
Posted by Nancy/BLissed-Out Grandma at 12:01 AM

This is a very moving look at nature and its harsh realities. It makes me sad to think that so much has been damaged by our foolish and greedy ways. My hope is that large lessons will be learned and new ways of being will emerge, but hope seems fragile in these times... Thank you, Nancy, for reminding us what is at stake.

What a touching story about Phoenix, and a dose of reality. Nature has a way of dosing up reality along with incredible wonders.

I am still mourning Phoenix, but the first night I kept waking and crying. I just couldn't believe it, but as we all know, you get over these things eventually. Thank you for putting these links in, I've been following the progress on Facebook, too.

Nature is harsh and unforgiving. Many tears have been shed over the loss of that beautiful eaglet. Very touching post, Nancy, every little bit of sharing this helps me. Hugs to you.

I saw the news about Phoenix linked from your FB page and was wondering whether the subject would come up with Augie and Vi when they return.... Funny how sad we can get about something like this ~ I was sad, even though I never watched the videos with you guys.

That is sad about Phoenix. Reminds me of the animal hospital TV programmes I used to watch with my mum. Some poor little animal would die and we'd both end up crying. :(

Just watched AVATAR finally, and there was so much in there about nature and these issues. I didn't realize that before watching it.

How sad. It's a good thing for kids to know about some of life realities at least at their level. I was walking with my grandson at age 2 1/2 when we found a dead seagull at the edge of the beach. He talked about it for days and asked questions galore but integrated the concept of all things living and dying.

Ah...yes...considering my somewhat embarrassing addiction to CNN, I've been watching a lot of oil spill coverage. And after having seen the entire series of Planet Earth episodes, I am more affected by what we are doing to nature than those whose livelihoods are being endangered. While I know that it is extremely upsetting to have your paycheck yanked out from under you, I also know that we are destroying the lives and environments of animals and plants that are defenseless against us. And that is our fault.

Neal loves Wild Kingdom. I mean, LOVES it. And it's so hard for me to watch because I hate to see the harshness that exists in nature naturally. But you're right, it serves a purpose, it establishes a balance. And it is only when we, loaded with deli sandwiches and ammunition, come stomping in with our tree stand and hunting license, that the balance is the threatened.

Nature is harsh sometimes..but miraculous too, sometimes I think that it all balances out:)

so heartbreaking! Incredibly well written.... I'm glad and sad that I read it. I was so attached (obsessed) with my baby bird in the flower pot and if I had seen little Phoenix on the video cam :(....

I am so worried about the gulf and the bees...

This was an incredibly beautiful post. Wow. That's all I can say. Well done.

Living in the country, I can so identify with your post. As my children were growing up, they would rescue one baby bird or animal every spring, sometimes more. They all had their stories.
You captured the feelings of disappointment and sadness over Phoenix well.
Thanks for the sensitive post.
(I like your new look)

Life, like nature, is full of dualities. Incredible joy, devastating sorrow. Light and darkness. We tend to extol one and demonize the other, but it's all part of the whole.

Nice, thoughtful post. We have never shied away from the harsher side of nature. We raise our own chicks (as you know) and sometimes things don't work out. Sometimes our adult chicks get sick and we cull them. Sometimes a fox or a hawk does the work for us. I try to teach my little ones not to be scared of death, but also to honour all life, from little ones like Phoenix to venerable old ones like our 95-year-old neighbour. Thanks for making me think a little on a Sunday evening. L.