Most people know each other pretty well when they get engaged. We had known each other two months, and had only been dating for half that time, so there were many moments over the course of the summer when we discovered things about each other--or about ourselves. Some of these moments also set things in motion for our future. 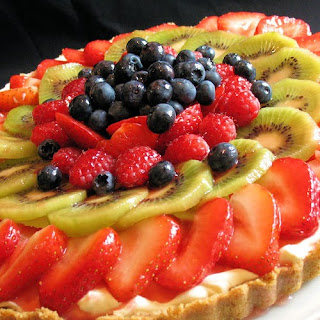 Fruit tarts vs. fish fillets. I've already mentioned that Peter did--and does--all the cooking and laundry and other what we used to call "woman's work." Meanwhile, I drove the boat and cleaned the fish. One weekend I went to my family's cabin without him. While I was gone he made "fancy French fruit tarts" for a party we were attending Monday evening at my boss's home. The way Peter told it, he was toiling at the kitchen counter with his complicated French cookbook and lovely fresh fruit when I strolled in, slapped down a handful of fish fillets, and commanded, "Fry these up for dinner." I don't think I commanded. But I may have placed the plastic bag of fish in or near the area where he was working with French pastry. It became a motif of our conversations at the party, underscoring his devotion to me and our openness to mixed gender roles. And as he reminded me this morning, he has been feeding me regularly for 25 years now.

Career vs. family. Shortly after we got engaged, Peter flew to Providence to interview for a job producing publications for the American Mathematical Society. It would have been a huge career move, and at another time in his life he might have jumped at it. But he didn't want to complicate Abby's life, or our still-new relationship. I was grateful that he didn't ask me to leave my job, family, and friends behind. It worked out for the best for him, too. Within a year or two, he would establish his own business, working from home with a flexible schedule that has made possible our major projects including the carousel and Wild Rumpus Daycare for Grandkids.

What's in a name? I decided very quickly that I would keep my own last name. I'd already built a 20-year career with it, and besides, I had thought for a long time that it was cool to keep one's own name. Which brings me to....

Telling our story. I found myself telling our story again and again, partly because people were genuinely interested and partly because it was a way to process this major life change. Certain details came to represent unique aspects of our relationship...and perhaps, in some ways, to strengthen them. Me keeping my name, him doing the cooking...these details surprised few of our friends but many of our family members.

Punchlines, part a. Sometimes in telling the story I'd go for a little shock value. Example: "Oh, I think I'm just getting married so I can keep my own name." Not true, but fun to say.

Punchlines, part b. "I met him, and two months later we were engaged....I've taken longer to pick out shoes!" This one was very true. In fact, it still is.I have very narrow, hard-to-fit feet, so I mostly buy from catalogs or online. I study styles and shapes and try to figure out what will work for me. Probably half the shoes I've ordered have gone back. In this case, my "impulse purchase" has turned out to be a wise and fabulous investment.
Posted by Nancy/BLissed-Out Grandma at 3:06 PM

I like punchline #2 - so true!
Can I borrow Peter just long enough to learn how to make one of those fabulous tarts?

I made a lot of big decisions pretty impulsively, so I would have totally been on your side, and it turns out I would have been right to be.

Hmmmm....love, you seem to have landed smack in the middle of a dream--a man that cooks and does laundry?? Here's to impulses that pay off--may they balance out the ones that don't! lol

I love the punchline at the end of this story. Well played.

Your story is so romantic. Especially the part where you throw the fish down on the counter. Love it!

You two make such a wonderful pair! I'm glad we're still hearing your story-- it's beautiful (except for the fish encroaching on the pastry!)

And here's something we have in common (in addition to second marriages, grandmothering, and blogging)-- narrow feet! Gee, but I'm hard to fit, and I just refuse to wear shoes that are not comfortable. It ain't easy...

That's all so cool.

I think it's really nice when people aren't afraid of reversing the traditional roles, and keeping one's name is such a good idea, imho. It looks to be a fine pairing : ) How wonderful for both of you.

Wow, Peter sounds amazing! A man that cooks and does laundry!!!!!? Loving hearing your romantic story.

What a wonderful relationship you have with you husband! My late husband and I had a very close, very connected marriage for nearly 35 years. I always felt so blessed, and I feel that way about the two of you.

Congratulations on 25 years! My husband does almost all the cooking too! (And I like to mow the grass. lol) Nothing wrong with blurring gender roles!

When I first read the title of this post, I thought is said "fruit and fish tart" and I was thinking "hmm..I can't imagine that would be very tasty but maybe the tilapia would take on the taste of the blueberries??" I've only had one cup of coffee this morning...

It is all very traditional in our house. Neal goes to war, I cook and clean and keep the cats alive. But I applaud you on chucking tradition straight out the window where it usually belongs. And just out of curiosity...how WAS Peter's fancy French tart?

Y'know...some people date for 25 years and end up only being married for 2 months. So congrats on getting it right!

Good for you! May you celebrate again in another 25 years.

"these details surprised few of our friends but many of our family members."

I love that. It is so true of many things in my life, too.

Gotta love a man that cooks! :)