How do you know it's spring? 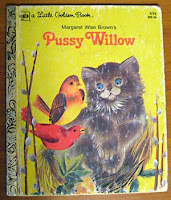 I asked Augie, "How do you know it's spring?" Here's what he said:

When the groundhog casts his shadow
And the small birds sing
And the pussywillows happen
And the sun shines warm
And when the peepers peep
Then it is Spring.

He was quoting, verbatim, from Margaret Wise Brown's Pussy Willow, a Little Golden Book first published in 1951. Pussy Willow, a little gray kitten, encounters a frog ("peeper") who asks "How do you know it's Spring?" When Pussy Willow doesn't know, the peeper answers with those six lines.

When we first brought this book out last fall, I wasn't sure Augie would like the flowery language, but in fact he asked to reread it many times. We hadn't gone back to it for at least a couple of months when he recited this passage to me.

(FYI, I see that Amazon has a newer version with a new illustrator.)
Posted by Nancy/BLissed-Out Grandma at 12:10 PM

How wonderful! I wonder how old I was when I first was able to recite a poem? I suspect I was older than Augie, but then I never had a grandmother who read to me.

I'm so impressed! I love that Augie could do that, and that he so loved that book! I'm going to get it to take to Sacramento with me in June, so I can read it with my Zachary, who'll be 3 1/2 then.

Thanks for the great tip!

Hey Blissed-Out! Ah yes, the little sponge that accumulates knowledge without any rhyme or reason other than it appeals. Fabulous. Indigo

That is just so awesome. I can't wait to be able to read to a grandchild. I have 3 big boxes of books from my kids and many of them are Little Golden Books! I think they were about 19 cents back then!

It never really ceases to amaze me how much my nieces retain (and can recite) after reading a book. My sister, an English teacher, reads to them constantly so it can get pretty entertaining around their house! When I first read this I thought about the U.K./ U of L joke...
How do you know it's spring?
The cardinals are sitting on the fence watching the cats play! ;) Ha.
But yours is better.

I so loved Little Golden Books as a child. Thank you for reminding me of these gems.
The hunt is on to gather these for my daughter, who I know will love them!

And you must be so proud, what an adorable child!

Margaret Wise Brown... a wise woman! I think I prefer the old illustrations, though. So 50's!

I love The Little Golden Books..and it sounds like Augie does too!! It sounds like he not only listened..but thought about spring too..enough to recite it back to you..wonderful!! :)

Thanks for your comment on my blog (o:
Us Grandma's need to stick together
I hardly ever read the kids the Golden books
I have them...I should get them out
I noticed in your last post about replies
you seem to prefer to email
I so love to get a comment on my blog and not have to find them on email...we are all different (o:

Awww...sweet! I loved those Little Golden Books as a kid, and it makes me so nostalgic to see them now. Classics!

That is the sweetest thing! We really don't know what goes on in their heads do we! Precious memory.