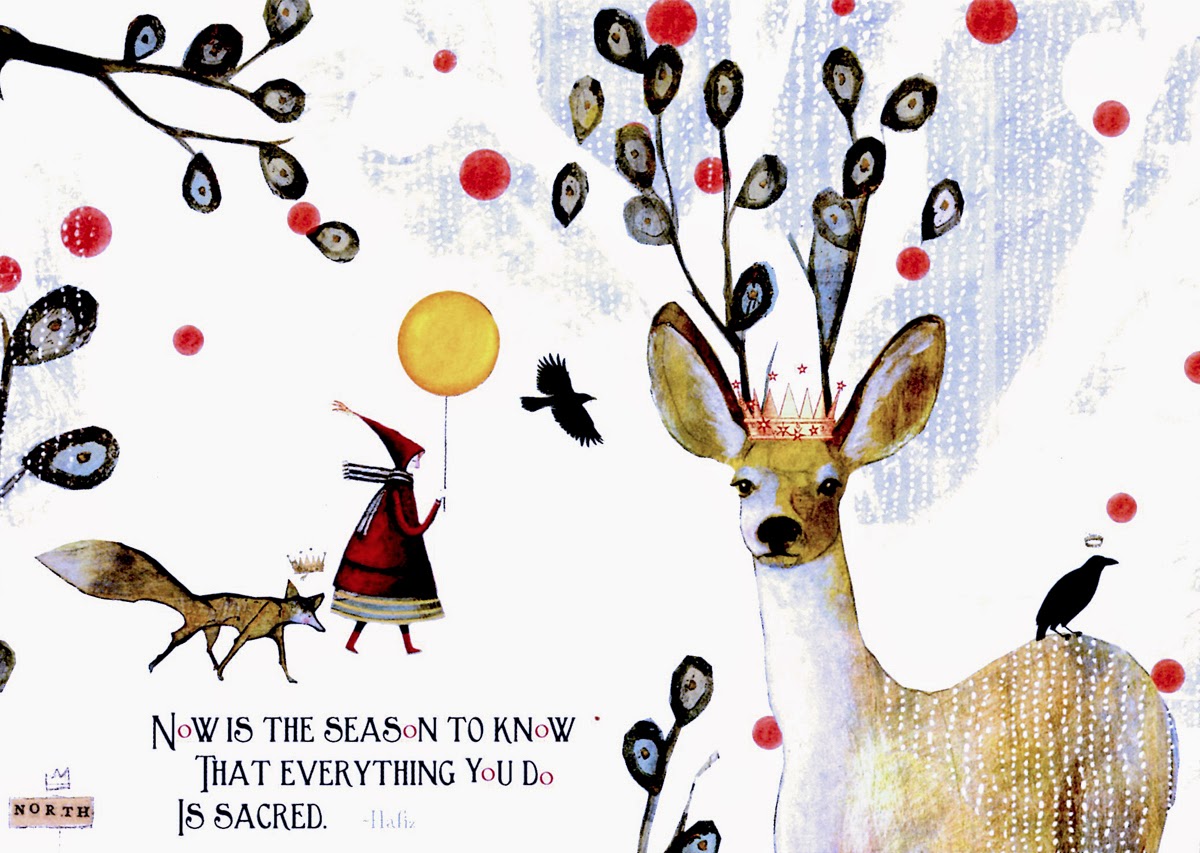 Posted by Nancy/BLissed-Out Grandma at 5:01 PM

Labels: christmas, Christmas music, everything you do is sacred

Beautiful post! Very meaningful. I hosted the usual craziness this year and that included adding over 5,000 Legos bricks to the family holdings just with my purchases alone. All the while, feeling tired and stressed, I kept promising myself that next year would be different. I'll aim for the same fun but less surrounding "fluff!"
Happy New Year, fellow grandma!

I loved this, and I am much in the same mindset as far as Christmas goes. You are so fortunate to have those beautiful grandchildren. It's tough to be sick at any time, but to be sick at Christmas is doubly hard. Thank you for this wonderful reminder to be grateful for all that we have and all that we are to one another. Hugs! :-)

Merry Christmas and Happy New Year to YOU, Blissed!!!

I totally agree with everything you said above about this holiday season being more laid back... easier going.

Everything is sacred. Thanks for the confirmation.

Merry Christmas and a Happy New Year! I am sorry to hear about your brother...that must be hard for your whole family.
Slowing down is a good thing and just being in the moment is grand:)

Thanks for this sincere Christmas post. i hope you've had a meaningful and Merry Christmas.

Thanks for this sincere Christmas post. i hope you've had a meaningful and Merry Christmas.

Nancy, this is a beautiful post filled with all the true spirit and meaning of Christmas. Yes, I finally "stopped" and found my center with it, and with that, great peace.

Poor Augie. It reminded me of my first Christmas with Rick and the boys -- at 5 a.m. Kevin was up and hurling. I thought, "I must really love this kid because I'm cleaning up kid-hurl and he isn't even mine!" Hope all is well now!

A beautiful and though provoking post. We do things more low key, too and it is easier on everyone. I feel sorry for my daughter and her family who have to work in 3 sets of parents over the holiday -- that is stressful. Happy New Year, Nancy!

What a great reminder that everything we do is sacred!

Very sweet. I think that is the path we're easy into as well for this hectic season. Perhaps quieter and more thoughtful. Though I do wish I grandchildren weren't so far way....

That quote is perfect, and things like that don't come to us without a meaning. I'm glad you interpreted it as you did and wish you strength during this time with your brother. Peace be with you.

I went to the last five services our minister of 18 years will give. Hate to see him go but he's closing in on 80 & he's in poor health.

Our Christmas was low-key but really really nice. For once I did NOT go to the Dollar Store for stocking stuffers. I bought handmade soaps & sundries from one of my clients & my husband was dee-lighted. Nice to surprise them once in a while.

This is such a beautiful post. I found your discussion of listening in on the service quite true to me as well. This year's church service was my first since last Christmas. Even worse than a C&E. Been like that the past couple years. But I loved sitting still in the evening light and singing along with the hymns I'd known since -- well, since forever. Peaceful.

Happy New Year to you.

This is a gorgeous, soft and reflective post. Thank you for the gift of it. I also love your card, and the Hafiz quote. What a great way for me to start my Sunday.

This reflective post speaks to me on the eleventh day of January as much as it would have when you wrote it. The gentleness of the post is soothing and reminds us to honor that which is sacred in our lives at all times. There are times when we need the music and reflection of the season to remember what it is all about.

Oh, you summed it up so beautifully. I need to hear these kind of sentiments.

Blessings to You and Your Family; especially your brother.